Beijing’s vast military parade on 1 October offered further insight into its thinking about how to keep enemies on the back foot in its near seas.

The most notable aircraft in the flying display was the new Xian H-6N (pictured below), a long-term descendent of the Tupolev Tu-16 bomber – and a mainstay of Chinese naval airpower. The type featured an aerial refuelling probe that could, tanker resources permitting, greatly extend its range. More intriguingly, a concave belly replaced the bomb bay found on previous versions. 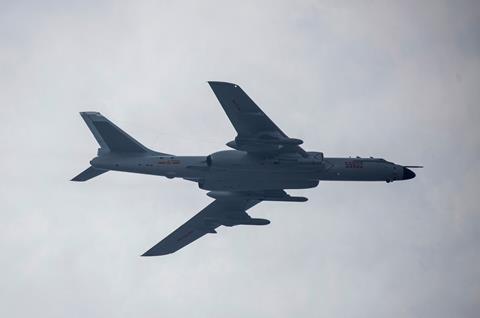 Early speculation suggested that this was to carry an air-launched version of the DF-21D anti-ship ballistic missile. This view changed, however, after the revelation of a pair of small, delta-shaped unmanned air vehicles (UAVs) designated the WZ-8. It is believed that the H-6N would deploy this vehicle from its belly. The WZ-8’s likely mission is to make a supersonic reconnaissance pass above enemy forces before landing at a friendly air base.

Such a capability, used in conjunction with other UAVs and sensor platforms, would be one part of the robust sensor-to-shooter “kill-chain” Beijing requires to observe and rapidly attack enemy air bases and warships with cruise or ballistic missiles.

Beijing also showed off its DF-26 anti-ship-capable intermediate-range ballistic missile, as well as numerous short-range missiles that could be used to powerful effect against enemy air bases. Also displayed were DF-ZF hypersonic glide vehicles mounted atop China Aerospace Science and Industry DF-17 missiles. After a ballistic launch, the weapon would glide to its target after release. Its ability to manoeuvre mid-flight is deemed to make it invulnerable to missile defences.

Uncertainty about how capable these systems are and their levels of development – or deployment – complicates work for military planners working for potential rivals such as the USA, Japan and Taiwan.

Tokyo is keenly aware of Beijing’s growing capabilities. In October, the US Department of Defense cleared a $4.5 billion upgrade for 98 Mitsubishi F-15Js, with the type to receive an active electronically scanned array radar, new mission computers, and an upgraded electronic warfare system. Tokyo also continues to take delivery of up to 147 Lockheed F-35As, including 40 F-35Bs that will operate from two helicopter destroyers that will be converted to aircraft carriers.

Tokyo is also in the early stages of developing an all-new fighter, known variously as the F-3 or Future Fighter. This is likely to be a large, twin-engined jet with a heavy weapons payload.

It is a truism in defence circles that the Pentagon’s greatest ally in justifying defence procurement is Beijing. If recent years are any guide, 2020 will see continued speculation about Chinese capabilities, all fuelled by calculated stories in Chinese state media. And, in November, all eyes will be on Airshow China in Zhuhai, the biennial extravaganza of Chinese firepower.