NH Industries (NHI) is gearing up to begin qualification activities later this year for the naval-variant NH90 helicopters being procured by Germany under its Sea Lion programme.

Berlin is to acquire 18 NFH rotorcraft as replacements for its navy's 21-strong fleet of elderly Westland Sea Kings, used for search and rescue and transport missions, with deliveries of the first three examples to take place in late 2019.

Military certification trials will take place with the second flight-test aircraft, which performed its maiden sortie in November 2017.

Airbus Helicopters, which owns the largest stake in the NHI consortium, is responsible for the German procurement and will assemble the aircraft at its Donauwörth facility in the south of the country.

Silke Hirn, who heads up the Sea Lion programme at Airbus Helicopters, says the first two serial rotorcraft are now in final assembly at Donauwörth.

She describes the qualification schedule as "challenging" as the manufacturer strives to meet the programme's production and delivery deadlines.

An initial batch of three helicopters will be handed over in the fourth quarter of 2019, with deliveries to run at a pace of about one aircraft every two months from 2020.

Germany ordered the helicopters in 2015 and questions have been asked about the pace of development, given that the NH90 is a relatively mature programme and the Sea Lion is almost identical to the maritime variants already operated by France and the Netherlands.

However, Hirn disagrees: "Considering that this is the first qualification of the German naval variant, including the integration of German-specific communication and mission equipment, the qualification period for this configuration is not long," she says, noting that the application of the German defence ministry's acceptance procedures is also a contributing factor. Military certification is scheduled for mid-2019. 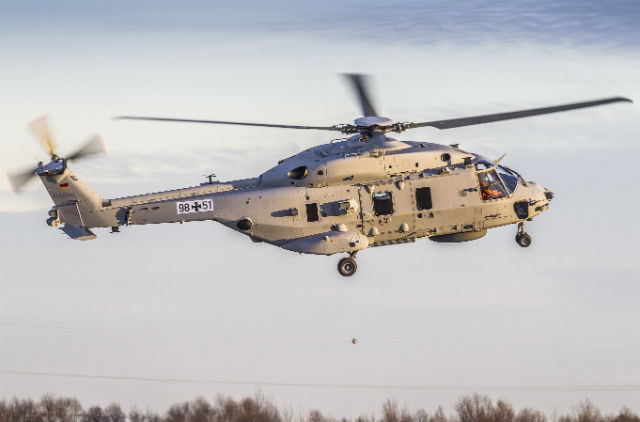 Although some minor updates to the helicopters' transponders, based on new legal requirements, will be needed later, they "will not be missing any military capabilities" at service entry, he says.

No weapons integration on the platform is required as the Sea Lion will be armed with a pintle-mounted machine gun only.

In addition, because the German navy is not the launch customer for the helicopter, this should avoid most of the issues experienced by the country's army on its troop transport NH90 TTHs.

The army was the lead operator for the TTH variant and has experienced a raft of teething issues and low availability rates with its fleet.

A substantial number of those helicopters now require an extensive retrofit programme to bring them up to the FOC standard, with that process lasting up to two years per aircraft, he says.

Ensuring no repeat of the maturity problems at service entry for the Sea Lion fleet is vital, says Schoell, as the manufacturer eyes a looming German requirement for anti-submarine warfare (ASW) helicopters to replace its navy's Sea Lynx fleet.

"That is one of the reasons it is important to be on time with the Sea Lion and make it a success," says Schoell.

Very few changes would be required to modify the basic Sea Lion helicopter to make it suitable for the ASW role, as it is already pre-wired for the mission equipment, he adds.