UK military investigators have attributed a 2017 incident, in which a Lockheed Martin C-130J operated by the Royal Air Force’s 47 Sqn was written off, to the flightcrew’s lack of situational awareness as they attempted to land on a temporary strip in darkness.

However, the Defence Safety Authority (DSA) notes that a “variety of inter-linked factors compounded this lack of [situational awareness] making the accident more likely.” 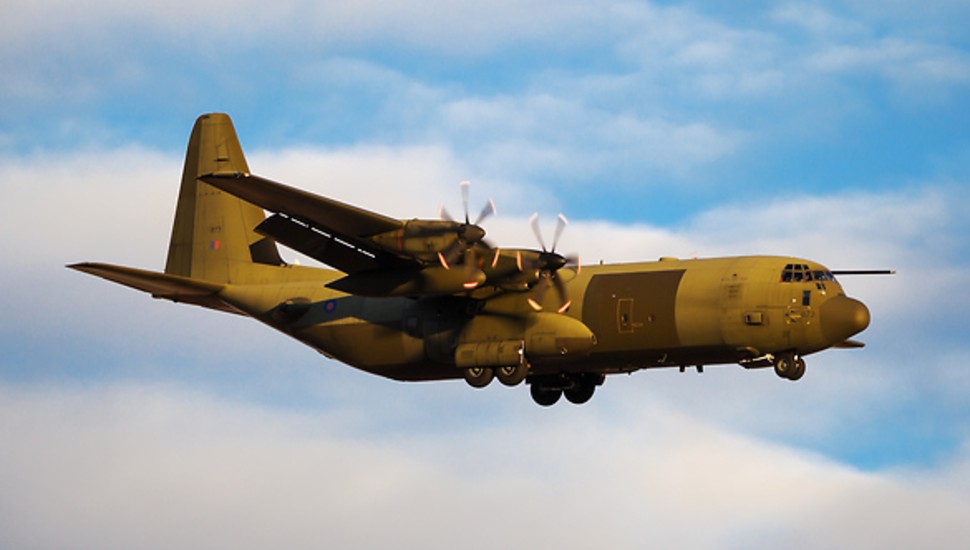 The turboprop airlifter was subjected a 4.2g impact as it landed short of the runway on upward-sloping ground, sustaining damage to its fuselage.

Flying in support of Operation Shader – the UK’s contribution to the fight against Islamic State – the C-130J (ZH873) was performing on a routine resupply mission from RAF Akrotiri in Cyprus to a temporary landing zone (TLZ) in northern Iraq on 25 August 2017.

Having acquired the touchdown box at the TLZ – a 150m (500ft)-long area marked with infrared lights to indicate the start of the runway – the crew began their approach around 3nm (5.5km) out.

After a “largely uneventful” initial approach, both pilots, wearing night vision goggles, struggled to discern the semi-prepared strip during the latter stages of the landing.

They described it as “very dark with little visual acuity” and the pilot flying said the touchdown box area appeared to be “floating”, with minimal ground definition.

A pre-flight meteorological briefing appeared to overestimate the amount of light that would be available at the landing strip, the report notes.

Confusing operational doctrine over the lighting configuration for tactical missions, as well as potentially degraded or inoperable infrared taxi and landing lights on the aircraft, compounded the issue.

There were “insufficient visual references to judge a flare and make a safe landing” and the crew should have instead performed a go-around, says the DSA.

As a result of the poor illumination, the crew were unable to discern precisely where the runway began. “Both pilots stated in interview that, as the [co-pilot] called 20ft [altitude], the ground appeared to rise up at the aircraft and the aircraft made a heavy contact short of the touchdown box,” the DSA says.

Although the crew believed they had touched down around 15-30m short, subsequent analysis “indicated that the actual point of impact was on an upslope 120m short of the runway”.

No surveys available to the crew identified the upslope, although they had been informally warned of “unusual” radio altimeter readings on final approach.

Analysis of satellite data identified a section of terrain, sloping upwards at an angle of 4°, immediately before the 90m-long overrun area preceding the runway.

Errors relating to the glideslope flown – 2.5° rather than the prescribed 3° – and the pilot’s aiming for the front instead of the centre of the touchdown box, also contributed to the short landing, the report says.

Had the correct procedures been followed, the Hercules would have landed around 45m further on, which “would almost certainly have resulted in less structural damage”, says the report.

Compounding the issue was a flare that was “late and incomplete”; had the manoeuvre been performed correctly and completed, the turboprop would have touched down nearly 120m further along the runway, the report says.

With the C-130J operating at 61.5t, the rate of descent should have been around 5ft/sec according to the RAF’s safe operating limits; post-incident analysis suggested a figure closer to 9ft/sec.

However, landing onto the upward-sloping terrain exacerbated this already high descent rate, giving an effective figure of 23.7ft/sec – more than four times the RAF’s limit, and still twice that of a higher rate cleared by Lockheed.

Calculations suggest that the C-130J was subjected to a 4.2g impact at touchdown, which rippled the skin and caused pulled rivets.

As the aircraft bounced, “the [pilot flying] initiated a go-around”, says the report, “and following subsequent bounces the aircraft began to climb away”.

However, so violent was the impact that the turboprop was “initially climbing away on a heading approximately 20° displaced from the runway centreline.”

While in the climb the flightcrew noticed that the C-130J was not pressurising sufficiently, while personnel in the cargo compartment observed a “whooshing sound” that they believed was caused by air escaping through the fuselage aft of the port wing root.

As a result, the pilots elected to make an emergency landing at Erbil International airport in Iraq, which was considered the nearest “safe” location. The crew, along with items removed from the Hercules – which included the cockpit-voice and flight-data recorders – were subsequently relocated to RAF Akrotiri on 27 August.

Only minor injuries were reported by the nine personnel aboard the aircraft.

No holes in the fuselage were located, with the investigation concluding that the noise was caused by “turbulent air” from the separated edges of the fuselage skin panels.

Analysis concluded that “significant design limit loads had been exceeded across much of the airframe” with “widespread damage to its primary structure”.

Although valued at £17.5 million, parts worth £5.5m were salvaged from the damaged C-130J, the report says. The aircraft was delivered new to the RAF in 2000, records Cirium's Fleets Analyzer.

Both pilots were experienced flying instructors, with more than 13,000h between them. However, the pilot flying – who had also been nominated as the aircraft commander – had not been deployed on operations for three years and was unfamiliar with the landing zone. He was seconded from XXIV Sqn – an operational conversion unit – for a period of 10 days.

His colleague, however, was assigned to 47 Sqn in September 2016 and had made 20 landings on semi- or unprepared runways over the preceding seven months. He was also familiar with the landing zone.

“Nomination of the pilot flying as aircraft commander exacerbated the issues of a flat cockpit gradient, setting circumstances for unassertive behaviour from the [co-pilot],” the report notes.