Leonardo has set its sights on potential future light-attack aircraft sales in Africa, after signing a co-operation agreement with South Africa's Paramount Group linked to its M-345 jet trainer.

Announced during the Africa Aerospace & Defence exhibition near Pretoria on 20 September, the pact – embodied through a letter of intent – will evaluate the "development of an operational configuration of the M-345" for the African market, Leonardo says. 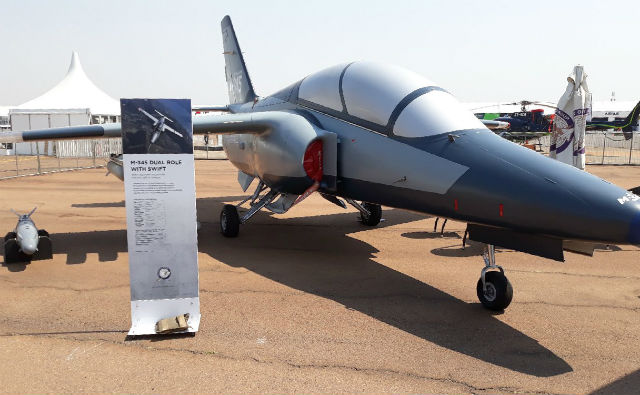 If advanced, the initiative will lead to the basic trainer being updated with Paramount Advanced Technologies' Swift mission system. The South African partner's chief executive, Ralph Mills, describes the potential combination as a "short-timeframe, light-combat and surveillance solution".

Leonardo points to the M-345's "multirole capabilities and costs comparable to a turboprop aircraft" as supporting its pursuit of sales to African military customers. The European company has so far secured an order to produce the trainer for the Italian air force.

Flight Fleets Analyzer shows that Leonardo's formerly-Aermacchi-branded unit has previously supplied its MB-339 and SF-260 trainers to a multiple African nations, with a combined 118 units still in service with the air forces of 12 countries.