Lockheed Martin has won a $172 million contract from the US Navy and US Air Force for the second production lot of its stealthy Long Range Anti-Ship Missile (LRASM).

The contract continues production for the air-launched variant of LRASM, including engineering support, the manufacturer says in a statement. The first set of LRASMs were delivered to the USAF in December, a milestone reached as part of Early Operational Capability for the weapon. Lockheed Martin says it anticipates receiving several annual production lot orders in total.

As China’s Navy increases the size of its fleet capable of sailing into the Pacific Ocean, the US military is stocking up on LRASMs as a counter measure. The missile’s long range allows pilots to fire it without coming within reach of China’s anti-aircraft weapons. 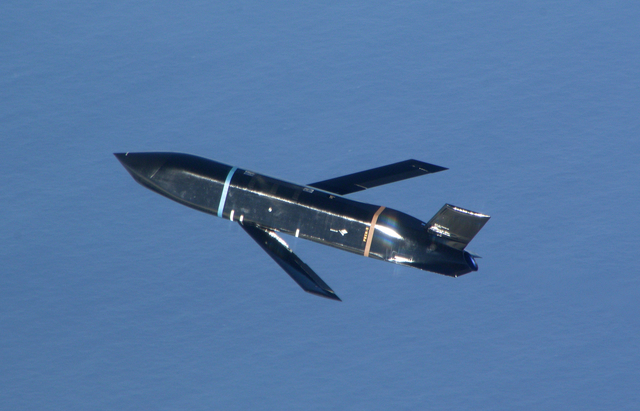 LRASM over ocean during test flight

LRASM is designed to detect and destroy specific targets within groups of ships using its sensors, encrypted communications and a digital anti-jamming GPS, according to Lockheed Martin. It is designed to be used in battle against the surface ships of advanced foes, such as China or Russia – adversaries who could disrupt and attack traditional electronic means of targeting including intelligence, surveillance and reconnaissance platforms, network links and GPS navigation.

The missile can be armed with a 454.5kg (1,000lb) penetrating blast fragmentation warhead, according to Lockheed Martin. The LRASM is stealthy and is thought to have a range of greater than 500nm, based on the unclassified range of the Joint Air-to-Surface Standoff Missile – Extended Range. The long range capability of LRASM enables the B-1B to fire on targets from outside the range of direct counter-fire weapons.

The missile was first flight tested in 2013. LRASM was funded by a partnership between the USAF, USN and DARPA.