Omega to compete for US Air Force commercial tanker service

Omega Aerial Refueling Services is considering buying new aircraft and pulling old ones out of storage in order to meet the US Air Force's interest in adding commercial tanker services.

Omega's stated interest in expanding its fleet of aircraft comes after Lockheed Martin and Airbus announced on 4 December that they would team up to offer tanker services to the US Department of Defense.

Both companies are responding to a June request for information from the United States Transportation Command (USTRANSCOM), which stated that it had 20,000-30,000h per year that is not being supported by aerial refuelling service.

The companies are also preparing to ramp up their offerings in response to US Air Force Secretary Heather Wilson's plan to add 14 more air tanker squadrons to the service's inventory, and delivery delays to Boeing's 767-based KC-46A Pegasus – the replacement for the air force's ageing Boeing KC-135 fleet.

"We are very much interested in bringing our expertise to that problem, and expect to go ahead and either bid or partner once the solicitation comes out," says Omega president Bill Schaefer. 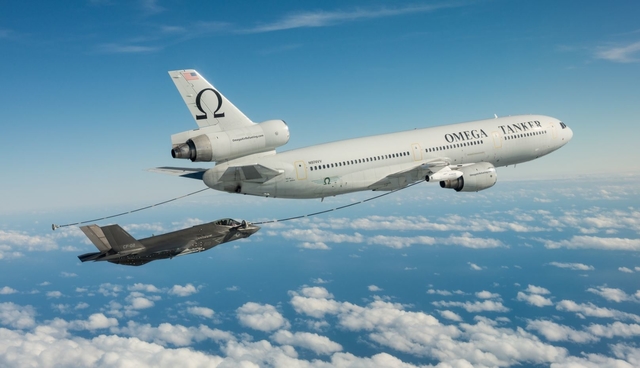 Schaefer says he believes that USTRANSCOM's identified 20,000-30,000h need would require between 17 and 20 tankers to fulfil. In response, Omega is looking at expanding its fleet beyond its current two Boeing KC-707s and one McDonnell Douglas KDC-10.

The company would initially bring into service KC-707s and KDC-10s, which are currently sitting in storage. However, to meet the command's need for boom refuelling – its aircraft are currently only equipped with a hose-and-drogue capability – the firm is also looking at acquiring additional tankers.

Omega has provided commercial aerial refuelling services to the US Navy and US Marine Corps for the past 18 years. Typically, those missions include refuelling for non-combat flights over the continental USA, exercises or when aircraft are being repositioned overseas.

However, Schaefer cautions that adding tanker capacity to the USAF will take time. “This is something you're not going to start on day one," he says. "The air force would have to grow into [it]."

That is a point acknowledged by USTRANSCOM, which said in its June notice that it initially only wants 7,000h of capacity provided by commercial firms per year. The US government expects its experiment to be fully funded, but says it is uncertain if the commercial services contract will be a long-term effort, or a short-term solution.

For its part, Lockheed sees a USTRANSCOM commercial service contract as a potential entry point into a quickly expanding aerial refuelling market in the USA. This sector has long been dominated by Boeing, with the KC-135, KC-10 and KC-46A, although Lockheed notes that since 1960, it has delivered hundreds of KC-130s to the USMC, USAF and international customers.

"A lot of people don't realise that [the KC-130] is fully capable of refuelling everything from slow-moving helicopters up through fighter aircraft," says Larry Gallogly, Lockheed Martin Aeronautics' business development director of USAF mobility programmes. "We have an extensive level of experience in that regard."

As part of its teaming arrangement with Airbus Defence & Space, Lockheed plans to put the European company's A330-based multi-role tanker transport at the heart of its bids. It will bring to the partnership its combat aircraft experience, including survivability and multi-domain command and control technologies, says Gallogly.

"It can range from anything from standard defensive systems, large aircraft infrared countermeasures, radar warning receivers, to masking of the heat source on the engines," he says. "For the tankers to be able to hold their ground – in other words, to operate at the same distance from the battlefield they operate today – they will have to have increased protective measures as the threat rings [from an adversary's defences] get larger and larger.”

Airbus and Lockheed have also pledged to begin "conceptualising the tanker of the future", in an apparent nod to the USAF's interest in developing a stealth tanker, which could refuel advanced fighters such as the Lockheed F-22 and F-35 within hostile airspace.

Any stealth tanker development would come at the behest of the USAF, Gallogly notes.

"We certainly have a lot of expertise in that area, but it will be driven by the customer's requirements. They will determine how far along the stealth spectrum they want to go, and we can provide those capabilities."