USAF reveals that five, not two, B-21 test aircraft in production

The secretary of the US Air Force (USAF) has disclosed that five test examples of the Northrop Grumman B-21 Raider stealth bomber have entered production at Air Force Plant 42 in Palmdale, California.

Previously, the USAF had said that two examples of the top-secret flying wing, which is in the engineering and manufacturing development phase, were under construction. 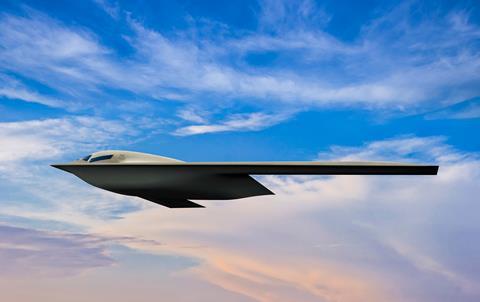 The US Air Force has not released an actual photo of the B-21, only artist renderings

Though complex next-generation aircraft development programmes often fall behind schedule, the B-21 is keeping pace, secretary of the USAF Frank Kendall said during a speech at the Air Force Association’s Air, Cyber and Space Conference in National Harbor, Maryland on 20 September.

Activity at Northrop’s facilities in Palmdale has increased substantially over the past 12 months. During an 8 September visit by FlightGlobal to see the company’s production line for the Lockheed Martin F-35 centre fuselage, dozens of newly erected portable buildings were seen outside of an adjacent facility, where it is believed B-21 test aircraft are under construction. The USAF has not released an actual photo of the Raider, only artist renderings.

The USAF wants the B-21 to be operational starting in the mid-2020s. Service officials have said they anticipate the aircraft will first fly in 2022.

“You will never hear me make optimistic predictions about programmes. All programmes have risk, and the same is true for the B-21,” says Kendall. “But, at this point at least, the programme is making good progress to field real capability.”

The next-generation stealth bomber is designed to perform long-range conventional and nuclear strike missions for the USAF. The aircraft is to be part of the USA’s nuclear triad, a strategy that aims to have three options for nuclear strike: aircraft-carried bombs and missiles, ground-based ballistic missiles and submarine-based ballistic missiles.

The service wants to buy a minimum of 100 examples of the B-21. The average unit procurement cost of the stealth bomber is estimated to be $639 million (in 2019 dollars).

The USAF plans to gradually replace its fleet of Boeing B-1B Lancer and Northrop B-2 Spirit bombers with the B-21. It aims to have a two-type bomber fleet made of the B-21 and modernised Boeing B-52s, which would receive more efficient engines and electronics upgrades.