Airliner net orders came in at 139 for April as 151 new orders were offset by 12 cancellations, with another 21 swaps.

Overall, the order backlog for airliners ended April at 7,946, up 36 on the previous month.

This article was put together by Flightglobal Insight using the ACAS database.

Note: The analysis is for passenger, freighter, combi and quick change aircraft. 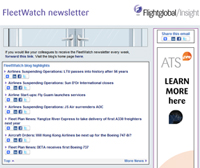