The Edmonton-based airline, which disclosed the news on 27 January, currently operates three 737-800s, according to Cirium fleets data. 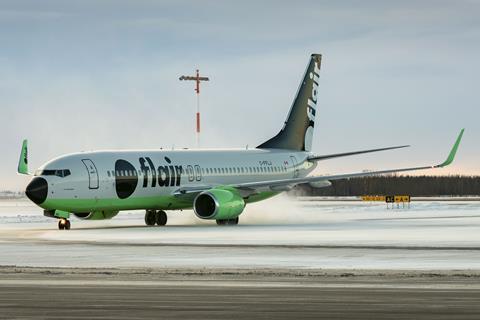 The move puts Flair on track to achieve a goal of operating 50 aircraft within five years, the carrier says. The 737 Max will carry 186 seats.

In disclosing the fleet expansion, Flair says that 777 Partners “recently entered into an agreement with Boeing for 24 new Boeing 737-8 aircraft along with options to purchase another 60”.

Boeing’s website does not list 777 Partners as a Max customer. The airframer did not immediately respond to inquiries about when 777 Partners placed that order.

Flair serves about 10 Canadian destinations. Prior to the pandemic, it operated seven 737s and also served US destinations from Canada.

In 2016, Flair began scheduled flights for and under the brand of NewLeaf Travel Company. In 2017, Flair acquired NewLeaf’s assets and changed the schedule airline’s name to Flair Airlines.