Delta Air Lines quietly began removing Boeing MD-90s from its fleet in the second quarter, as it continues to shift towards larger gauge aircraft.

The Atlanta-based carrier removed 12 of the 158-seat aircraft from its "operating aircraft fleet" during the period, a quarterly financial filing shows. It ended the period with 53 MD-90s. 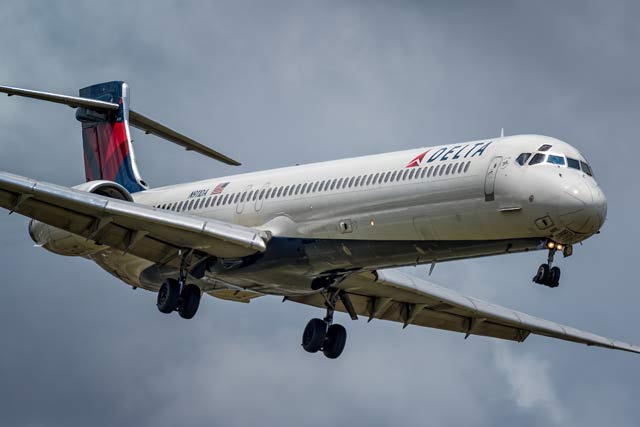 The move comes as something of a surprise as Delta executives continue to say that the airline is in the process of removing its 104 Boeing MD-88s with 149 seats, and not its MD-90s.

"We continue to retire our MD-88s and replace them with larger, more efficient [Boeing] 737-900s and [Airbus] A321s," said Glen Hauenstein, president of Delta, during an earnings call on 12 July.

The MD-90s are both newer and more fuel efficient than the MD-88s, with an average age of 21.3 years compared to 27.7 years, respectively, the airline's fleet plan shows.

The MD-90 has International Aero Engines V2500 engines, similar to the ones on the Airbus A320 family, and the MD-88 has Pratt & Whitney JT8D engines.

All of the MD-90s that Delta has removed from its fleet this year are former China Southern Airlines aircraft that were acquired used in 2011, Flight Fleets Analyzer shows. Two aircraft shown as retired in the second quarter – MSNs 53524 and 53525 – were both built in 1996 and had around 31,500 cumulative cycles.

"It's likely that these are aircraft that have reached a certain stage in longevity where maintenance requirements are worth more than the value of the asset," says Henry Harteveldt, president and travel industry analyst at the Atmosphere Research Group.

For example, the aircraft could be due for a costly heavy maintenance check, he says.

The early MD-90 removals could also be driven by a high price for parts, including for the in-service MD-90 fleet as well as other aircraft types in Delta’s fleet, says Michael Lapson, a senior valuations analyst at FlightAscend Consultancy. For example, the V2500 engines could be parted out to support both other MD-90s.

Delta is under pressure from Wall Street to both keep costs in check and raise revenue as fuel prices soar. It is in the midst of taking more than 70 new aircraft this year that allows it to replace older models with new, more fuel-efficient ones as well as grow capacity at a lower cost per seat.

However, the airline also faces pressure to reduce capacity growth in order to boost revenues in the high fuel price environment. To this end, it has cut 0.5-1 percentage point from its planned capacity growth in the second half of 2018, with full year growth now forecast at roughly 3%.

Removing larger MD-90s instead of MD-88s could be a move by Delta to keep capacity growth in check for the year, says Harteveldt.

The carrier expects an at least 41% jump in average fuel prices to $2.32-2.37 per gallon in the third quarter, after it saw a 31% increase during the three months ending in June.

The airline declines to comment on the MD-90 removals.