Embraer has become the latest aircraft manufacturer to sever ties with Russia following its invasion of Ukraine.

The Brazilian airframer says it will no longer provide support to operators in the country who are covered by international sanctions. 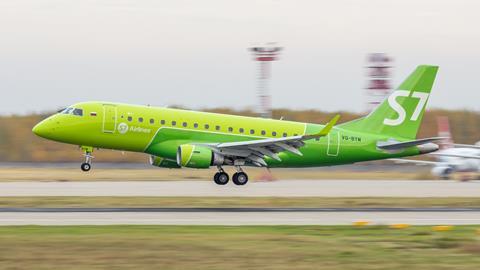 “Embraer is closely monitoring the evolving situation and has been complying, and will continue to comply, with the international sanctions imposed on Russia and certain regions of Ukraine by suspending parts, maintenance and technical support services for customers affected by sanctions,” it states.

Cirium fleets data shows the manufacturer has relatively limited exposure to the Russian market, with just 22 commercial aircraft and 17 business jets in service there.

S7 Airlines has the largest fleet of Embraer aircraft, flying 17 E170 regional jets. All are leased from Dublin-based AerCap and already appear to be covered by EU sanctions which restrict leasing arrangements with Russian carriers.

AerCap announced earlier this week it was terminating leases with its Russian customers.

Belavia, the flag carrier of nearby Belarus, also operates a fleet of 12 Embraer jets.

Airbus and Boeing have also suspended the provision of spare parts and other support services to Russian operators.