The new Airbus leadership team kicked off its first Paris air show with the launch of the long-range A321XLR twinjet which has ended the week backed by orders and commitments for over 240 aircraft.

During the Paris show week, Airbus announced 10 customers for its new variant, who have placed orders and commitments for a total of 243 aircraft through a mix of new contracts and the conversion of existing orders (see table).

Lessor Air Lease (ALC) was first to order the A321XLR, signing for 27 aircraft on the opening day of the show. Two other customers - IAG and Indigo Partners - have ordered aircraft for allocation to their airline divisions. 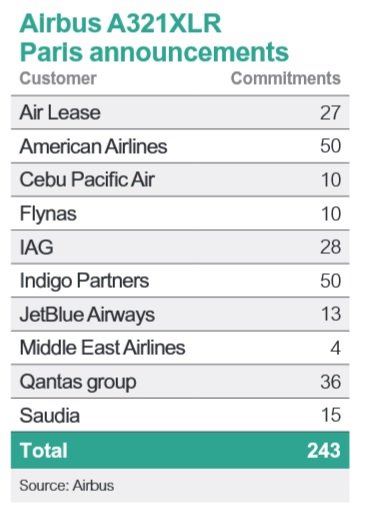 The IAG deal comprises 14 firm orders and 14 options. Six of the firm orders are allocated to Aer Lingus and eight to Iberia. Indigo’s order for 50 XLRs is being allocated to three airlines in which it invests – 18 for Frontier in the USA, 12 for JetSmart in Chile, and 20 for European carrier Wizz Air.

Airbus declines to be specific on the overall size of the market for the new extended range aircraft, although chief commercial officer Christian Scherer says he expects there will be “hundreds” of A321XLRs sold.

The XLR launch is seen a tactical move by Airbus to disrupt Boeing’s plans for an all-new 220-270-seater dubbed the New Mid-market Airplane (NMA).

“It should be obvious that part of Airbus’s strategy here is to borderline that potential new aircraft from Boeing,” said ALC chief executive John Plueger when announcing the lessor’s launch order. “And it does provide a very effective airplane for a lot of same routes that the NMA would be targeted for. But it does so many years earlier.”