Skymark set to commit to a dozen Boeing 737 Max jets

Japanese carrier Skymark Airlines has outlined plans to bring in a dozen Boeing 737 Max jets, including four ordered directly from the manufacturer.

Skymark, an all Boeing 737-800 operator today, plans to order four jets including Max 8 and Max 10 variants from Boeing. It will also take options on two more examples of the CFM International Leap-1B-powered narrowbody. Boeing says the order will be added to its backlog once finalised. 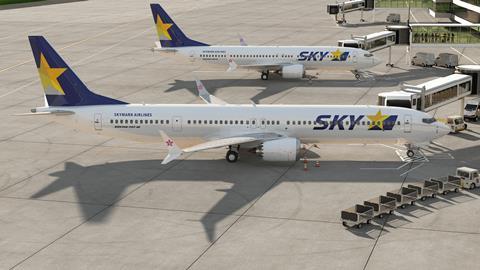 Skymark will take both Max 8 and Max 10 variants

”With commonality and enhanced capabilities, the 737-8 and 737-10 will enable Skymark Airlines to optimise its fleet across all operations.”