Airbus has given its strongest signal that it is looking to revisit the dedicated freighter sector, in a bid to break a run of strategic missteps that have left rival Boeing virtually unchallenged.

When the airframer first showed off the A350 XWB family in July 2006, it featured a freighter version of the -900 variant. But the proposition has taken 15 years to emerge, with Airbus having experienced poor reception for its A330-200F and the stillbirth of the A380F in the interim. 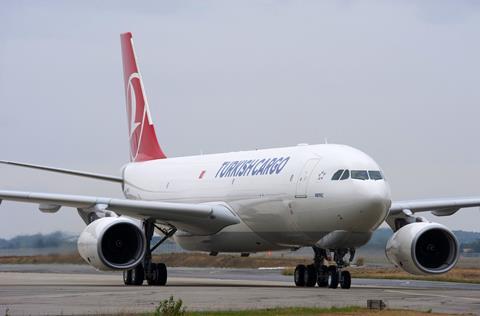 “The freighter market has been put to the forefront during the pandemic because freight is the only thing flying in significant quantities,” says Airbus chief commercial officer Christian Scherer. “It has exacerbated the fact that the freight market is underserved by Airbus.”

He claims customers have told the airframer that the A350, with its range, volume and operating costs, is a “really good platform” on which to develop a “fabulous freighter”.

“That’s an important message to take into account,” says Scherer. “To some extent we’re now reacting to those market forces. I dare say we have some wind in our sails towards seeing the emergence of an A350 freighter as we consolidate our studies and our business case.”

Some six months before it delivered its final A300-600F – to express cargo specialist FedEx in July 2007, exactly a year after unveiling the A350 – Airbus had committed to developing the A330-200F to compete against Boeing’s 767-300F.

But while the 767-300F has secured over 230 orders, just two customers – the express cargo integrators FedEx and UPS – have been central to its popularity, and Airbus was not able to convince them to defect to the A330-200F. Whether the A330-200F was unnecessarily capable, its price too high, or availability too low compared with the 767, Airbus was unable to replicate the success of its A300-600F in the integrator market.

This contrast was underlined recently when FedEx received its 100th 767-300F, and revealed that it was exercising options on another 20 of the type, taking to 48 the number to be delivered to it over 2022-2025, while the A330-200F backlog dropped to zero.

Just 38 A330-200Fs have been delivered across the type’s entire customer base; barely half the number of aircraft ordered in the first year after its launch.

Airbus has not delivered a freighter for more than four years, following the handover of an A330-200F to Etihad Airways in February 2017, and its involvement in the freighter market has been more peripheral, through a participation in the conversion business.

Its EFW joint venture with ST Engineering has resulted in cargo modification programmes for the A330-300 and -200 – creating freighters with respective 61t and 60t payload capability – as well as conversions of the A321 and A320.

This venture had followed an earlier failed Airbus attempt to establish a conversion line for A320s with the involvement of EFW plus Russia’s United Aircraft and Irkut.

Airbus has long been aware of its lack of presence in the freighter sector, a situation lamented by chief executive Guillaume Faury towards the end of April.

Creation of an A350 freighter might seem a logical step, given the Airbus rationale of developing the A350 to dent the dominance of the 777. 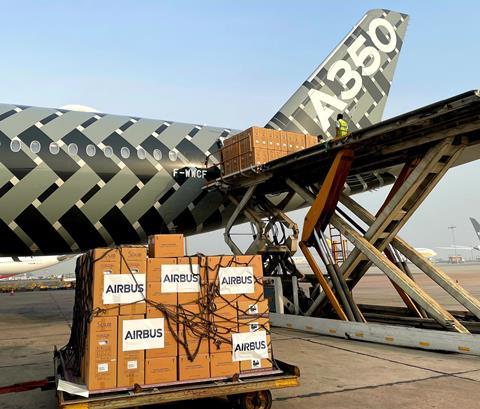 But the task is not straightforward. With 277 orders, the 777F has far outsold the passenger 777-200LR on which it is based, attracting interest from a diverse cargo customer portfolio.

Airbus, keen to avoid another misalignment with cargo customer requirements, will need to consider whether to pursue the original -900 freighter concept, producing a jet with around 90t payload capability, or aim for higher capacity.

The most radical idea would be to develop the A350 freighter with a tailored fuselage length, perhaps around 70m (229ft 6in) to position it midway between the two passenger variants. Such a decision would not be unprecedented; Boeing originally conceived the 747-8F as longer than the passenger 747-8, although the two eventually emerged with fuselages of the same length.

Prior to the pandemic, Airbus had forecast a global demand for around 2,500 new-build and converted dedicated freighters over the two decades to 2038, with 60% of them intended for replacement – notably, a large number of Boeing MD-11Fs remain operational with cargo fleets – and 40% for growth.

But new-build aircraft would total some 850 jets, it predicted, and most of these would occupy the mid-size category. Airbus expected about 360 new-build freighters would be needed in the high-capacity category, with payload capabilities of over 80t. Boeing has most recently estimated a need for 930 new-build freighters, split more-or-less equally between medium and large widebody models.

Airbus vice-president of programmes Philippe Mhun says an A350 freighter will only be launched “when launching conditions are met”, without elaborating.

While the pandemic has generated an undeniable near-term surge in air cargo traffic, less clear is the extent to which pre-crisis forecasts will need revising, and the degree to which the increasing focus on sustainability will influence Airbus’s latest attempt to exorcise its freighter demon.