Why technology is targeting the harmful contrail

The short answer to the question ‘Are contrails bad for the environment?’ is yes. However, in the complex world of the upper atmosphere, there are caveats. Their impact depends on a host of conditions including weather, time of day, and altitude, explains Professor Dr Robert Sausen from the Institute of Atmospheric Physics at the DLR, Germany’s research body centre for aeronautics and space.

The attention on aviation’s greenhouse gas effect has been squarely on the emissions of carbon dioxide. This is relatively simple to measure because it is proportionate to the fuel burned during a flight. Contrails are associated with non-CO2 emissions, which are gaining prominence as having a hitherto untold impact on global warming. 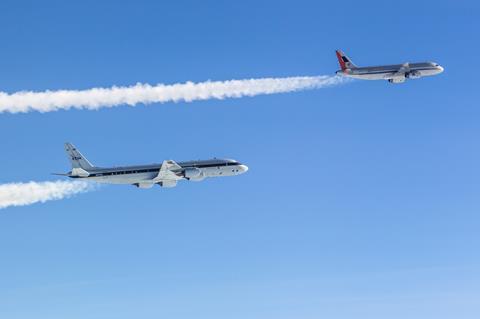 The focus on non-CO2 emissions is sharpening because there is increasing recognition that their effect on climate change could be greater than that of CO2 emitted from aircraft engines. Most industry bodies quote a figure of 2-3% for air travel’s contribution to anthropogenic CO2 emissions causing global heating.

However, if the impact of non-CO2 emissions is added the effect on climate may triple, according to a recent study led by David Lee at Manchester Metropolitan University in the UK. As the World Economic Forum points out: “There is a growing understanding around the additional climate impact of aviation through the production of non-CO2 emissions, which could be responsible for as much as 60% of the sector’s contribution to climate change.”

The impact is significant, but scientists acknowledge it is hard to measure. The effect comes from the release of nitrogen oxides, water vapour, and sulphate and soot particles at high altitudes from aircraft engines causing the formation of contrails. “Aviation produces emissions in the upper atmosphere, an area where no other emitters exist so the non-CO2 effect is also far greater than other industries,” explains Sausen.

Eurocontrol explains that contrail cirrus clouds contribute a net surface heating to the radiative budget of the Earth. During daytime, this may have a cooling effect by blocking radiation from the sun, but on average across all flights it creates a surface warming effect. At night-time, however, heat is always trapped underneath this cloud layer, increasing the atmosphere’s temperature.

It is true that the impact of non-CO2 emissions is short-lived for contrails and up to 10 years for NOx emissions – which is trivial compared to CO2 emissions that live on for centuries, Sausen says. “However, if you look at the climate targets being set today, where the timeline is 2030, 2040 or 2050, you can see that non-CO2 effects play a significant role. Both types of emissions have to be considered to gain a full understanding of the impact of aviation.”

Unlike CO2 emissions, where avoidance means not burning Jet A-1 in the first place, there are simpler means of avoiding non-CO2 effects. “The good part is that you can to a certain extent avoid non-CO2 effects simply by operational means, such as preventing contrail formation,” says Sausen. “In addition, the use of different [sustainable] fuels such as biofuels or e-fuels will result in less aromatic hydrocarbons in jet fuel. This means less soot which equals contrails with a smaller climate impact,” he adds.

The aim of the Eurocontrol/DLR trial was to investigate the operational feasibility of contrail prevention by air traffic control and measure its impact. In particular, the aim was to avoid ice supersaturated regions in the atmosphere, and so reduce the likelihood of aircraft forming persistent contrails.

The air traffic controllers of Eurocontrol’s Maastricht Upper Area Control Centre (MUAC) changed the trajectories of 209 aircraft during the year with the specific aim of avoiding contrails. The trials took place on selected dates after 18:00 local time until midnight. A team of MUAC and DLR planners interpreted the predicted weather regarding ice-super-saturated regions and clouds and gave instructions to controllers to avoid specific regions by means of vertical clearances of up to 2,000ft.

During the trial, the technical feasibility of contrail prevention, the accuracy of ice supersaturated regions forecasts and the operational feasibility of vertical contrail prevention at specific traffic loads were evaluated. Conducting the trials during the reduced travel volumes caused by the pandemic created an advantage, making it easier for the controllers to deviate aircraft in less congested airspace, says Sausen.

Studying contrails is on the one hand easy because they are easily visible. Most disappear after 20-30 seconds and only have a minor impact on the climate. However, it is the contrails that spread and live longer that produce the greater impact. “This is where it gets difficult,” Sausen says. “Our questions are can we predict the likelihood of persistent contrails and how large will the radiative effect be?” 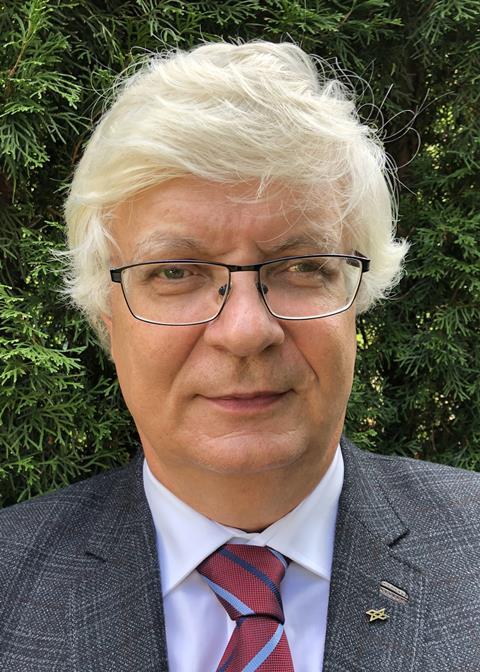 The DLR and Eurocontrol teams are examining the trial results and aim to publish them during the first quarter. While they are unlikely to be definitive in being able to measure the size of the radiative effect of contrails, it will be a ground-breaking study in the field, says Sausen.

Already, MUAC and the DLR have been able to establish a contrail prevention system to prepare and implement operational procedures, and to start validating the methodology with satellite image analysis provided by the DLR.

There are more studies on the cards to gain a deeper understanding in this area and provide operational answers. Germany’s Ministry of Economics is close to approving a project with a scale greater than the Eurocontrol/DLR one to run larger experiments with more aircraft and increased support for ATC. The aim is to bring the prevention of contrails closer to an operational solution and features partners like the DLR, German ATC body Deutsche Flugsicherung, Airbus and Lufthansa, among others.

In the UK, the Greener by Design body, formed by the Royal Aeronautical Society, set up an informal Contrail Avoidance Group in 2016. Its members include NATS (the UK’s main air traffic control provider), Imperial College, Cranfield University, and the DLR’s Atmospherics Physics group. Its aim is to demonstrate contrail avoidance across the North Atlantic.

“These trials will be significant steps along the road to embedding contrail avoidance as part of ATC procedure in Europe and across the Atlantic, with the eventual roll out of the practice worldwide,” says John Green, chairperson of the Contrail Avoidance Group.

Another focus area is forecasting. Scientists need to know accurate water and temperature profiles in the atmosphere to forecast the presence of ice supersaturated regions and therefore the likelihood of persistent contrail formation. However, measurements in the upper atmosphere are scant and predominantly come from radiosonde balloons. There is a proposal for an EU research project to examine how to better forecast weather at high-altitude flight levels.

This is not simply an area of academic study. Although the aviation industry is focused on solutions to reduce CO2 emissions, with the prospect of regulations and targets, there is the possibility that non-CO2 emissions will be included too, says Sausen. “Over the past two years I have seen a real change in the understanding of industry in this area,” he says. “They are afraid of regulations that might negatively impact them on the one hand, but they also understand that there are operational improvements that can help.”

From early February, Etihad Airways will begin a flight test programme on selected commercial services specifically designed to avoid the creation of contrails.

The Abu Dhabi-based carrier is working with Cambridge-based company SATAVIA and air traffic management bodies including NATS and Eurocontrol, to alter the flight paths of a service each week this year, gathering and validating data to establish if contrail avoidance can work on a systematic basis.

SATAVIA’s DECISIONX platform ingests individual aircraft flight plans, examines forecast weather en route and analyses planned flight trajectories to predict if contrails will be created during the flight, says Dr Adam Durant, the company’s founder and chief executive. “If the weather conditions are likely to form contrails, then the flight level can be adjusted to avoid them,” he explains. 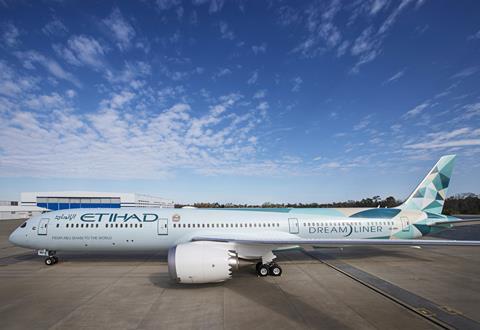 Etihad conducted a contrail avoidance demonstration flight through its Boeing 787 Greenliner programme that operated a commercial service from London to Abu Dhabi on 23 October 2021. Analysis by SATAVIA indicated that if the flight plan was adjusted in a limited way over Turkish airspace, bringing it to 39,000ft earlier than originally planned, then weather conditions were avoided where contrails would have been formed.

According to SATAVIA, the 787 only spent 6min in contrail-forming conditions creating contrails with a lifetime of less than 1h, whereas figures for the original flight plan would have been 32min and nearly 7h, respectively. The changes led to the flight saving 64,000kg (141,000lb) of CO2 equivalent forcing impact, or radiative effect, making it a highly successful trial, says Durant.

If the tests this year are successful, Etihad could use the DECISIONX platform to analyse its entire flight schedule and target flights that are predicted to create contrails and automatically create flight trajectories to avoid them, says Durant.

“It’s all about relating weather patterns to specific flights to find where contrails are going to be prevalent. Only about 5% of all flights will form persistent contrails, so if you can manage these to avoid them you tackle 90% of the problem,” he adds.

Another important aspect of this work is for the carrier to be able to claim the carbon credits for the CO2-equivalent avoided. SATAVIA is working with global carbon accreditation bodies like Gold Standard to validate and develop a methodology that will enable this, with the first trades possible this year, says Durant. “This would mean contrail avoidance generating a tradeable carbon equivalent offset credit, thus incentivising contrail prevention.”

The core technology was developed between 2017 and 2021 with funding from the UK’s Aerospace Technology Institute and European Space Agency to analyse and forecast hazardous high altitude ice crystal icing conditions that can cause engine failure or airspeed measurement errors.