Aviation safety has become, in many ways, a victim of its own success. In the days when aircraft were less reliable, and lacked the equipment to provide the crew with constant situational awareness and warnings if things were going amiss, a pilot’s flying skills were the primary determining factor in the outcome of a flight. The regulations around training tended to reflect that.

Twenty-first century aircraft – packed with the sort of avionics and other safety-enhancing technology a 1980s aviator could only dream of – do not tend to go wrong. However, that does not mean today’s pilots – if trained according to a syllabus laid down by the regulator – always know what to do when the unexpected happens. 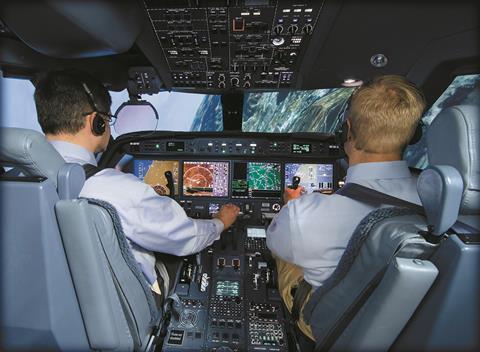 A lot of criteria for pilot training are based on worst case scenarios, following historic incidents

“Think of all the accidents that you have heard of. How many times were the crew members not qualified? Maybe one in a thousand?” asks Richard Meikle, executive vice president of safety and compliance at FlightSafety International. “The overwhelming majority met the regulation, but many of these legally qualified pilots weren’t prepared for the situation and couldn’t prevent the accident.”

Many of the criteria for airline and business aircraft pilot training are based on requiring crew to react to worst-case events, largely based on historic accidents involving older-generation jet aircraft. As aircraft evolved, different incidents occurred, and the training syllabus was simply added to over the years to expose trainees to these new scenarios.

But to be truly effective, pilot training needs to go beyond ticking a regulatory checklist and instead focus on areas that will make pilots better able to cope with a range of scenarios they might encounter, and spot danger signs early. “Regulations need to be seen as the bare minimum, an entry threshold of compliance,” says Meikle. “They are not a guarantee of safety.”

The challenge is changing the culture by impressing on instructor, employer and most importantly the pilot, that time in a simulator is about more than completing a series of tests. It is about encouraging pilots to become more engaged in their own training by helping to identify and focus on their weaknesses, says Brian Moore, FlightSafety International’s senior vice president of operations.

“The best way to find out where a pilot might be falling short is by questioning them on what they are least comfortable with,” says Moore. “For instance, ask them what mode on the flight control panel they do not use and why. The pilot will often say it is because they don’t understand it. That way you can drive training toward what the customer actually needs.”

Today’s aircraft have such complex, integrated avionics, the “concept of putting someone into the right seat and simply teaching them how to fly the airplane is antiquated,” says Moore. But high reliability on all this technology can instill a false sense of security. “So much has been introduced into the design of aircraft, there can be a complacency factor,” he says. “Pilots assume the machine will always work.”

Meikle points to the tragic example of Air France 447 where the training guidelines arguably failed to equip pilots to understand and react to their predicament. The Airbus A330 stalled before plunging into the South Atlantic en route from Rio de Janeiro to Paris in June 2009, killing all 228 on board.

“The aircraft was perfectly flyable, but the crew didn’t understand what they were dealing with,” he says. “The regulations say you must be trained to recover from a stall, but the pilots didn’t recognize they were in a stall. Their mental model was that the flight computers would not allow the aircraft to stall. Unfortunately, they didn’t understand the protections provided by the degraded level of automation had lost stall protection and couldn’t recover.”

Moore recalls an earlier non-aviation disaster, where over-reliance on technology – and the boredom it can instill – were contributory factors. The 1979 Three Mile Island nuclear accident happened because operators “in a low state of engagement lost control of a complex system that ought to have been reliable,” he says. “Humans are not always good at this sort of thing.”

While appreciating what an aircraft’s technology can offer is crucial, it is still vital that pilots comprehend the principles of aeronautics, believes Moore. “It’s an interesting balance. You need to understand the system well enough to know when it’s working and when it’s not,” he says. “And when things don’t work, when to reduce automation levels and go back to basic flying skills.”

However, going above and beyond the regulatory minimum when it comes to training is all very well. But what does it cost, and how does the person responsible for paying for the instruction justify the additional outlay? Meikle has a simple answer to the conundrum: “Safety is always expensive until you need it.”

Moore believes there are tangible benefits to investing in training. For one, showing pilots how they can become involved in advancing their own skills makes them feel more confident and engaged in their job, he says. Moreover, better training does not necessarily mean a massive increase in simulator  hours, he says. “It is the quality of that time; how the training is focused.”

Yes, additional training will be costlier, but he likens it to the decision people make when they walk into a jeweler and are given the choice between a one-carat diamond ring priced at $1,000, and another that is $10,000. “Doing only enough training to be signed off under the regulations does not always mean the quality is there,” he says. “There is a reason for that price delta.”

Moore sees signs of regulators shifting in the right direction, away from the “tick-box” philosophy, including with the European Union Aviation Safety Agency’s move toward adopting evidence-based training, which aims to assess the capability of a trainee across a range of core competencies rather than by measuring his or her performance in individual events or manoeuvers.

“Regulators are discussing it,” he says. “But aviation is a big ship with a small rudder. Changes take time to feed through.” Until then, it is for operators themselves – and training providers – to take the initiative. “We want to drive the customer into the mindset that they want to get involved in their training,” he maintains. “We say to pilots: Don’t just show up and be passively involved.”