Forecasts 2006: Spaceflight - Momentous year for US and Europe

The year ahead is brimming with potential: for NASA to return its Space Shuttle fleet to flight; for Europe to agree its space programme; for Russia to profit handsomely from NASA contracts; and for entrepreneur Elon Musk’s Space Exploration Technologies (SpaceX) to rock the foundations of the US launch business. 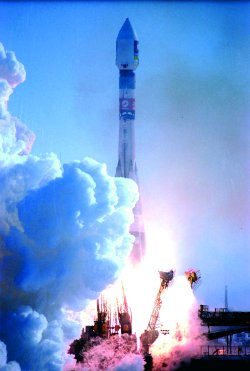 Stability is set to make 2006 a year for new starts after the uncertainties of 2005 that surrounded the European Space Agency and its new budget; Russia and its new space programme; and NASA and its new administrator.

Five launches planned for the first four months of 2006 will be significant. After a first-stage fuel-tank failure on 19 December 2005, SpaceX’s Falcon 1 rocket could this month succeed at the third attempt. The Falcon 1, costing $6.7 million to launch 570kg (1,250lb) to low-Earth orbit (LEO), is the most inexpensive launcher in the world and it could be joined by a $51 million per launch 24t-to-LEO rocket, which Musk is developing to compete with Europe’s Ariane 5, Boeing’s Delta V and Lockheed Martin’s Atlas IV rockets.

Another significant launch is the third, this February, of the Ariane 5 ECA, which can loft 9.6t to a geostationary transfer orbit. The occasion will see the ECA’s prime contractor responsibility move to its manufacturer EADS Space Transportation from its developer ESA. It will also be the first launch of an ESA-developed rocket since the agency’s ministers agreed to make ESA launchers prime candidates for all space science missions.

Meanwhile, on 27 March, Connecticut-based new launch provider UP Aerospace’s SpaceLoft XL rocket is planned to carry seven experimental and commercial payloads on a suborbital trajectory. This otherwise unexceptional launch will be notable because the vehicle will fly from the world’s first commercial spaceport, South West Regional Spaceport in Upham, New Mexico, which plans to host Virgin Galactic’s suborbital tourism services from 2009.

Another step on another long road will be the flight of Italy’s Unmanned Space Vehicle (USV), an 8m (26ft)-long supersonic glider. In the first quarter, the USV will be dropped by a stratospheric balloon from 65,570ft over Sardinia for a recoverable water landing. If successful, it will put Italy in a good position to lead ESA’s reusable launch vehicle (RLV) project – a decision on which is due in 2008.

The fifth notable launch will be the NASA-funded Soyuz-TMA crew flight to the International Space Station (ISS) in March. The USA does not have a reliable crew and cargo transport system, so the launch’s significance is that it will be the first of many NASA-funded Soyuz capsule and Progress vehicle flights designed to fulfil the USA’s treaty obligations to provide ISS crew return and supply from March.

As Russia’s space budget benefits from NASA’s needs, the joint European Union/ESA space programme should finally take off following agreement of the EU’s 2007-13 budget on 17 December. The joint programme was to have been launched in November, but was delayed by budget negotiation difficulties.

Once the programme is approved this year, the EU’s Galileo and Global Monitoring for Environment and Security projects will be on a firmer footing and the operations concession for the Galileo navigation satellites could go ahead in June – by which time the second test satellite should be in orbit following the first launch on 28 December 2005.

NASA is set to place its multi-billion dollar development contract for the Crew Exploration Vehicle in the middle of the year. And if NASA’s decision to remove a part of the external tank (ET) foam delays the intended May flight of Space Shuttle Discovery, then July will also see the second, and it is to be hoped, final return to flight mission. If that mission does not take place in July, the US agency may find its astronauts in space at the same time as China’s taikonauts, since the success of solo and two-crew flights in 2004 and 2005 could lead to China launching three taikonauts later this year.

This year will also see another new big player making waves. The Intelsat and PanAmSat merger will create the world’s largest satellite operating company and the market impact of its 53 satellites and combined $2 billion annual turnover should be felt in 2006.

Meanwhile, the creation of the world’s largest launch provider could encounter more problems. Proposals to create United Launch Alliance (ULA), a joint satellite launch business between Boeing and Lockheed Martin, have had to be postponed twice after the US Federal Trade Commission issued further antitrust review information requests and Elon Musk has filed a lawsuit against its formation.

With numerous maiden flights due in the first six months and billion dollar contracts set for the middle of the year, the second half of 2006 could see the space industry’s potential realised – or the fall-out of failure.