Low-cost carrier Frontier Airlines will drop 19 cities from its network as it embarks on a strategic transformation into a point-to-point carrier, moving away from its Denver hub-and-spoke model.

A Frontier spokesman confirms that the airline has notified 19 airports, all of which serve smaller communities, that it will not resume service. Checks by Flightglobal show that the carrier has already ceased service at some cities and will withdraw from the others by the end of April 2015.

"The Frontier business model is changing in many ways and the difficult decision to discontinue our service comes after careful analysis and evaluation. Historically Frontier has relied on connecting passengers flowing through Denver. We are now focused on delivering ultra-low fares to local traffic via point to point service," says Frontier's spokesman.

Frontier's withdrawal from the 19 cities will leave United Airlines as the only carrier operating on several routes, including those from Denver to Bakersfield, Eugene, Fargo, Fresno, Idaho Falls, Minot, Palm Springs and Santa Barbara, schedules in Innovata show. Southwest Airlines, in addition to United, also offers service from Spokane and Oklahoma City to Denver.

Several of the cities that Frontier is withdrawing from are served by low-cost carrier Allegiant Air, but with flights to other points besides Denver.

The withdrawal from the 19 cities appears to be the biggest network change Frontier has made in recent months, which have been marked by network tweaks and in some cases, the withdrawal of flights before they are even inaugurated. Earlier this month, for example, the airline said it has dropped plans to serve Nassau in the Bahamas from Trenton (New Jersey) and Washington Dulles from 20 November as the flights did not meet the carrier's expectations.

Separately, Frontier is ending service on several other routes, although the cities affected will still retain Frontier service to other cities.

The airline is discontinuing service between Dallas/Fort Worth and Memphis due to the route's underperformance, after launching service on 26 October. Checks on Frontier's website show that the airline will operate the last flights on the city pair on 6 January 2015.

Frontier will also end service between Washington Dulles and St Augustine (Florida) after 6 January, and suspend Denver-LaGuardia until the summer of 2015. Frontier's website shows that the last Denver-LaGuardia flights will operate on 19 December. The airline's spokesman says it is shifting LaGuardia service seasonally to its new route to Miami, which begins 20 December.

The carrier's network changes are in line with Frontier pulling back capacity at its Denver hub. The airline's chief executive David Siegel told employees in a 17 November letter that Frontier will seek to "right size" its Denver hub as it faces rising costs at the airport. FlightMaps Analytics show that the carrier will operate 420 million available seat kilometres (ASKs) out of Denver in May 2015 - when its latest announced network changes are in effect - down 44% from a year ago. 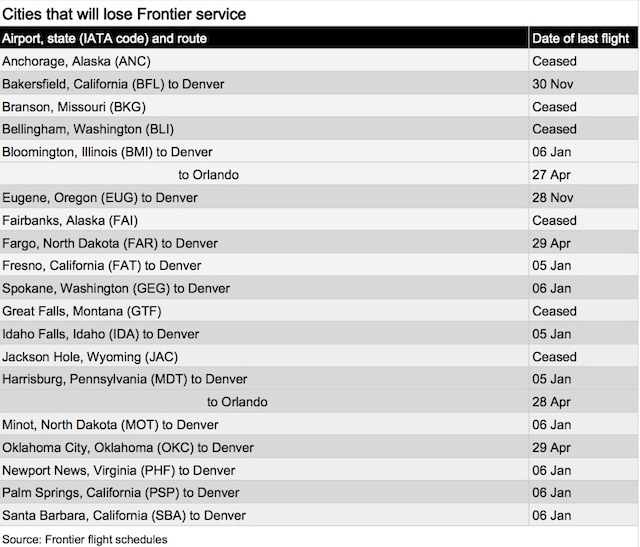