A mini unmanned aircraft powered by a hydrogen fuel cell has set a new distance record for hand launched-UAVs. The Pterosoar UAV flew 128km (69nm) in California, beating the previous record by 40km.

The propeller-powered Pterosoar is a joint effort between California State University of Los Angeles and Oklahoma State University (OSU). The propulsion system is supplied by Horizon Fuel Cell Technologies of Singapore. Video of the flight is available here.

Horizon says the flight used only 25% of the hydrogen stored on board, and the UAV's range with a full pressurised tank is 500km. The Pterosoar is expected to make a flight exceeding 15.5h within the next few weeks, the company says, setting a new endurance record for mini UAVs. 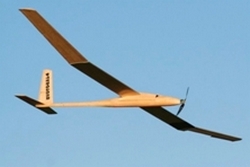 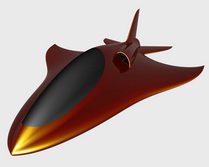 In April a Horizon fuel cell powered the Hyfish jet-wing UAV to 200km/h (108kt). The Hyfish was designed by Swiss company Smartfish and developed a consortium led by German aerospace centre DLR. Video of that flight is available here.

Ultimately Horizon plans to use "hydrogen battery" technology under development by Millenium Cell. The company's Hydrogen on Demand fuel cartridges use sodium borohydride as the hydrogen storage medium, and will reduce the size of the power system, says Horizon.