Only its second public outing since its surprise appearance at the Paris air show, Grob brought not only the second prototype aircraft to its stand (578), but also a new full-scale mock-up executive interior.

Niall Olver, chief executive of Swiss business aviation services company ExecuJet (pictured below), which is sharing around 50% of the costs and will market and sell the aircraft, says the SPn has met or exceeded all technical parameters. “Since Paris we have managed to improve fuel performance and reduce landing distance by 10% to 2,670ft [815m] and stall speed to 143km/h [77kt],” says Olver.

Olver says the composite aircraft, originally marketed as a utility jet to rival the Beech King Air, will make a versatile executive business tool. “With six passengers and one pilot, the SPn will fly an impressive 1,800nm [3,330km]. It also holds a maximum payload of 2,491lb [1,130kg], which exceeds any business jet below mid-size.”

With reinforced landing gear, anti-skid brake control and large wheels and low tyre pressure, the company says it is specifically designed for hassle-free regular operation on “unimproved” runways, which are usually the exclusive domain of turboprops and often comprise gravel or grass surfaces. 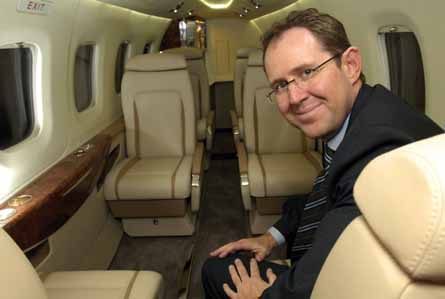 However, Grob has not stinted on luxury as it tries to capture lucrative executive clients. “Since Paris we have devised a flexible, executive six-seat configuration that offers additional features over the standard design such as full toilet and galley,” says Olver.
The executive cabin configuration comprises 18in (460mm) single club seats, plus two front-facing seats located aft. Fully adjustable, the cabin is outfitted with four fold-out tables, six 110v power outlets for laptops and headphone jacks for optional entertainment equipment.

The six-seat aircraft has an executive interior of light beige leather fitted by Swiss company Burnet Interiors. “We were very pleased to have been chosen to create the interiors for the Grob. We have been working on the programme since its inception and this EBACE sees the culmination of our efforts,” says owner Franck Burnet. The 40-year-old company won the contract against stiff competition from competitors including Jet Aviation and attributes its selection to a combination of “quality, price and availability”.

Grob said earlier in the week that Honeywell would be upgrading the SPn’s APEX integrated avionics suite, so it can accept optional equipment such as an enhanced vision system and future options such as auto-throttle, emergency descent mode and electronic flight bag.