Airbus Helicopters has formed a German industrial team to address a forthcoming requirement for up to 55 rotorcraft from the country’s military.

To be acquired under the Light Utility Helicopter – Streitkrafte (LUH SK) programme, the assets will be required for a variety of missions, including light attack and training, replacing the German army’s Bell 206Ds and older EC135s. 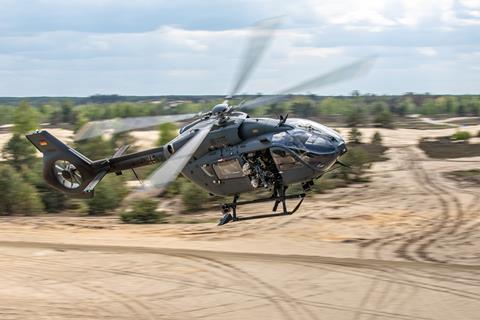 Airbus Helicopters is proposing the five-bladed light-twin H145M – which it builds in Donauworth in southern Germany – for the requirement, a number of which will be equipped with its HForce modular weapons system.

“We have a strong product with very high availability, guaranteed short delivery times and have organised support for the weapons system with a large number of German companies,” says Wolfgang Schoder, managing director of Airbus Helicopters in Germany.

“With the formation of the team, we are offering the Bundeswehr a complete configuration that can be procured quickly and efficiently.”

Germany has already acquired two variants of the H145M LUH: 15 for the air force in support of special forces missions (LUH SOF) and five examples of a search and rescue model for the army (LUH SAR).

Recent improvements include the integration of the Rafael Spike ER2 air-to-surface missile and advances to manned-unmanned teaming capability; a further test campaign for the latter technology is planned this summer.