Although the Apache and Shadow have previously demonstrated MUM-T interoperability, having the two types fall under the same chain of command is the result of “years’ worth of planning”, the army says.

The Shadow is equipped with the new tactical common datalink, which will allow it to be operated alongside Apaches to fulfil the army’s armed aerial scout role previously provided by Bell Helicopter OH-58D Kiowa Warrior helicopters, which are due to enter retirement.

For this role the Apaches will also be teamed with General Atomics Aeronautical Systems MQ-1C Gray Eagle UAVs, and both UAVs can be operated from the Universal Ground Control Station (UGCS).

"It's an improved capability that supports soldiers on the ground as they execute the various missions that we assign them,” says Lt Col RJ Garcia, commander of the 3-6 unit, says. “Nothing is stove-piped now. We now have the ability to share across multiple levels.

"They've been building this synergy themselves, but for different commanders…. Sometimes that tasking wouldn't support them working together.” 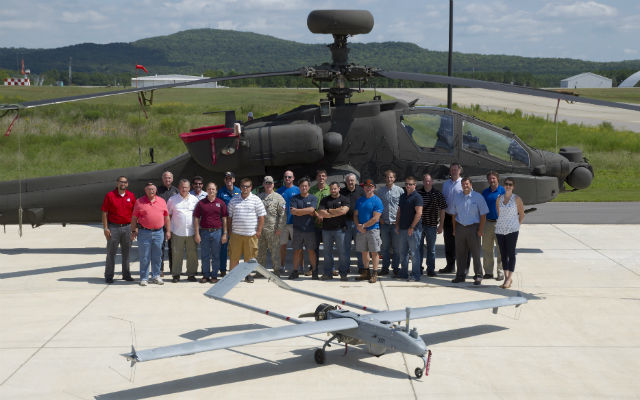 Shadows are typically controlled by soldiers in the UGCS, but Apache pilots can also control the UAVs should it be requested.Ground operators have five levels of control available to them, but an Apache pilot can request a particular level.

Final training is currently under way on the new system, and is expected to finish by the end of May 2015.

Lt Col Tory Burgess, product manager for Shadow tactical UAS in the army, adds that the force is “finally getting to the point where we can field two to three [Shadow] systems a month to the entire US Army, including the combat aviation brigades".