Helios 737 crashed with no fuel

Flight International online news Speaking exclusively to Flight International, head of the Greek Air Accident Investigation and Aviation Safety Board Capt Akrivos Tsolakis has revealed that the Helios Airways Boeing 737-300 crashed north east of Athens soon after it ran out of fuel while being flown by a student pilot whose flying experience was “a few hours in a Cessna”.

The co-pilot was unconscious and the captain was not on the flight deck, Tsolakis confirms. 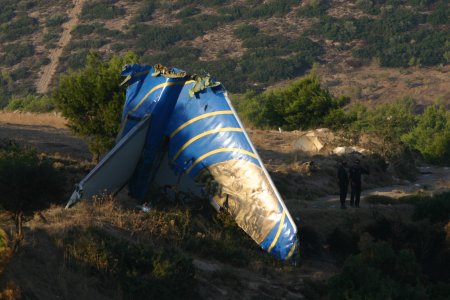 It was only 4min 50s into the flight before the crew reported an air conditioning malfunction, Tsolakis reveals, but they kept climbing. Passing through 14,000ft, the cabin altitude warning alert activated and it was not cancelled.

Tsolakis says the remains of three people, who were known to be on board, have not yet been identified. One of them is the captain.

He says they may possibly never be recovered because of the post-crash fire and the salt water used to extinguish it. Helicopters were used to water-bomb the site to stop the fire spreading.

The aircraft that operated Helios’ flight ZU522 on 14 August was a Boeing 737-300 (5B-DBY) manufactured in 1998. It took off for a flight from Larnaca, Cyprus to Athens, Greece that should have taken about 1h 20min, but crashed near Athens 2h 59min later.

The known flight sequence, confirmed by Tsolakis from his initial examination of high quality digital flight data recorder (FDR) readings, was as follows (times are local):

09:1?: Climbing through 14,000ft (4,270m), the cabin altitude warning alert activates and is not cancelled by the pilots for the duration of the flight. It self-cancels when the aircraft eventually descends through 10,000ft.

09:16: Last radio communication with pilots as aircraft climbs through 22,000ft.

10:07: Athens airport tries to contact the inbound aircraft because it should have begun its descent. No reply.

11:25 (approx): F-16s formate within a metre of the 737, report no captain in seat, copilot slumped on controls, two other people in cockpit, passenger oxygen masks deployed, no movement in cabin.

11:50:45 Aircraft begins descent, leaving holding pattern flown by the air steward, a student pilot with only a few hours’ experience on light aircraft. It is believed he maintained consciousness by using the portable oxygen equipment stowed in the cabin. The aircrad turns right out of the hold, passing over Evvoia island and the Aegean Sea to the north east of Athens.

11:??: Engines flame out for lack of fuel as the aircraft descends through 7,000ft. Aircraft turns left toward Athens airport.

12:04: Aircraft crashes among hills at Grammatikos.