As airline chiefs assemble in Miami for IATA's latest annual general meeting, there are new leaders at the helm of 16 of the 100 biggest carriers since they met a year ago in Doha.

There is relatively little change among the largest carriers, based on passenger traffic, over the last 12 months. KLM was the only one of the 20 biggest airlines to change chief executive, after deputy Pieter Elbers replaced Camiel Eurlings at the Dutch carrier in October. 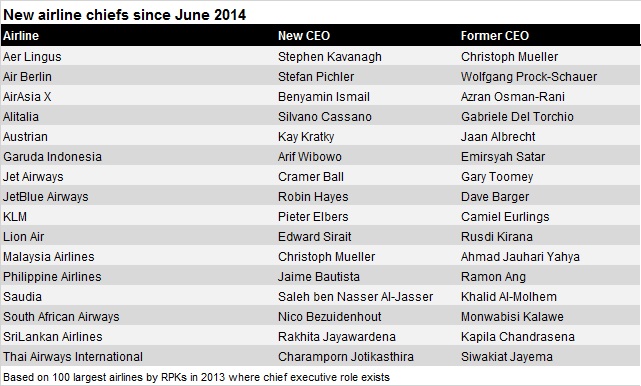 A number of the CEO changes have been seen at carriers in which Etihad Airways has made investments. New chiefs have been brought in at Alitalia, Air Berlin and Jet Airways.

Former Benetton and Fiat executive Silvano Cassano took over from Gabriele Del Torchio at Alitalia as part of a revamped management team installed at the Italian carrier after Etihad took a 49% stake in the airline in the autumn.

Jet Airways, meanwhile, also has a new boss in Cramer Ball – who, after helping to turn around another Etihad investment, Air Seychelles – was given the task of moving Jet Airways to profit. The carrier has embarked on a three-year restructuring programme.

Several long-standing chiefs have moved on over the last 12 months.

JetBlue president Robin Hayes took over from IATA board member Dave Barger in February. Barger, part of the New York carrier’s founding team, had been in the role for almost eight years and his contract expired in February. Hayes joined JetBlue in 2008 and was named president in January 2014 after previously serving as commercial chief.

There was also change at Indonesia’s Lion Group, where long-standing boss and owner Rusdi Kirana has become increasingly active in the country’s political scene. Earlier this year, he named Lion Air’s director of general affairs Edward Sirait as his successor, although he said he would remain a shareholder. Sirait has been with Lion for 12 years.

Another familiar name to depart this year is AirAsia X boss Azran Osman-Rani. He had led the Asian low-cost long-haul pioneer since just before its 2007 launch, but stepped down in January amid mounting challenges facing the operator.

AirAsia X subsequently appointed Kamarudin Meranun to the newly-created role of chief executive of AirAsia Group, which encompasses the Malaysian long-haul operator as well as its Thai and Indonesian operations.

Benyamin Ismail, group head of corporate development, implementation and investor relations at AirAsia, has been serving as acting chief executive of ­AirAsia X.

Other new chiefs include Thai Airways' boss, former Thai stock exchange head Charamporn Jotikasthira, and Aer Lingus's Stephen Kavanagh, who has stepped up to replace Christoph Mueller. Lufthansa Group’s Kay Kratky is to lead Austrian from the start of August.

SriLankan Airlines has begun advertising for a permanent chief executive as well as a chief commercial officer.