About 3,000 extra business aircraft flights are expected to head for southeast England during the Olympics, according to the UK Civil Aviation Authority.

The operators of these aircraft will need to book a slot to enter the wide area of restricted airspace that will apply from 14 July to 15 August, but the CAA says few have done so.

About 150 private flights will be carrying heads of state, the CAA estimates, but the Foreign and Commonwealth Office has warned them that because the Games is not a state occasion, their flight movements will receive no privileges, and general aviation (non-airline) arrivals at Heathrow have been banned.

London Luton airport will be available only as a drop-and-go destination because of parking and hangar capacity problems. The airlines are expected to carry an additional 500,000 visitors to Britain, so main airports will be particularly busy.

Flight plans for all operations have to be filed as normal, but if the operator has not been allocated an airspace slot the flight plan will be rejected. Non-scheduled flight plans must be annotated with a slot reference, and if they are, the CAA promised, they will be accepted "subject to security at the departure point". So Olympic-bound business aircraft will be accepted only if they depart from an airport that has approved security arrangements.

The CAA said: "If everybody leaves [slot booking] up to the last minute, it does not make any difference to the aviation system," explaining that when all the slots available on a particular day are gone, additional operations will be refused entry or offered a different date.

Slots, as normal in the UK, will be managed by Airport Coordination Ltd (ACL), and they apply only to operations in controlled (or temporary controlled) airspace. Controlled airspace has, effectively, been extended by the application of the Restricted and Prohibited Zones (see diagram). Another factor that business aircraft operators will have to take into account is that routes into what might be familiar destination airports will differ from normal, which may affect fuel planning. Air navigation service provider NATS has been tasked with re-designing routes in the southeastern airspace for Olympic security and airspace capacity reasons, and it has designated new temporary controlled airspace to cope with the anticipated business aircraft demand.

General aviation movements, operating under visual flight rules, that want to go to, or operate from, an airfield within VFR sectors in the restricted zone will have to file a flight plan. They will have to be bound by special restrictions, have a transponder emitting an allocated code and make radio contact with a lower airspace radar service operated by the Royal Air Force, call signed Atlas North and Atlas South. 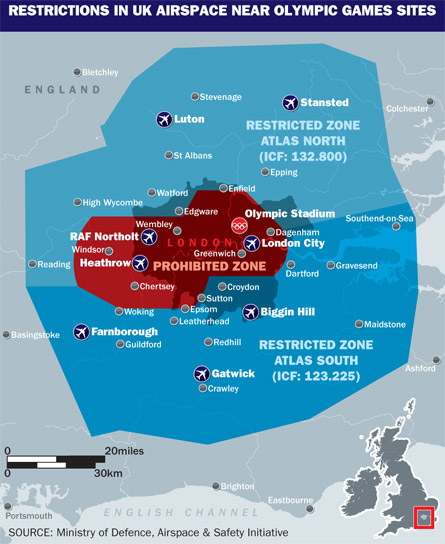 Aircraft without prior clearance can expect to attract rapid attention, up to and including interception by two fully armed RAF Typhoon fighters.

As an example of what London area business aircraft airports can expect, Biggin Hill airport business development manager Robert Walters said about 180 slots specific to Olympics attendance have been booked with Biggin as their destination, but he expects many more. This is over and above the normal 1,200-1,800 business movements that the airport gets anyway, with July always at the higher end of the range. Walters advised booking slots soon because "their numbers are finite".

Like other business aircraft airports, Biggin is competing to offer a slick total service package, complete with choices of rapid transport into central London and the Olympic Park.

Helicopter transport to the park has been banned, leaving London Heliport in Battersea as the only rotary wing destination serving central London, so most options are rail or road.