IN FOCUS: Engine makers prepare to do battle on 777X

Tempting though it must be for Boeing to adopt an "if it ain't broke, don't fix it" approach to a potential major revamp of its highly successful 777 twinjet programme, decision time is finally looming. And for the engine manufacturers, getting aboard the 777X could be a make-or-break event that will have repercussions for decades to come.

Famous for achieving an on-time first delivery to launch customer United Airlines in 1995 at the conclusion of a five-year development programme, the 777 has gone from strength to strength. But while it may have been nothing but good news for the airframer, the early three-way fight between rival engine makers General Electric (GE), Pratt & Whitney (P&W) and Rolls-Royce (R-R) left all three struggling for profits after resorting to bargain-basement pricing to win market share.

GE found itself on the verge of having to cut its losses and withdraw its GE90 turbofan from the battle, but its fortunes were transformed when it managed to secure an exclusive deal to power Boeing's 777-200LR and -300ER growth variants. It was a gamble that paid off in spades as the industry embraced the efficiencies offered by twin-engined widebody airliners, even for long, transoceanic flights. Orders for the more-expensive-to-operate, four-engined Airbus A340 dried up.

Forced to act, Airbus is developing its all-new A350 XWB, powered by R-R's Trent XWB, and Boeing is proposing to counter the emerging competitive threat with an update dubbed the 777X, which, if launched, would enter service before the end of the decade. Several airlines, including Emirates and Qatar Airways, have expressed interest in the 777X.

"Our customers are really comfortable with our decision to put the most advanced engine technology onto this 777, and that means, by definition, that's really the end of decade," says Boeing vice-president of business development and strategic integration Nicole Piasecki.

Boeing has invited the three engine makers to provide proposals for the 777X that would deliver a fuel burn improvement of "at least 10%". The two major airframe variants - the -8X and -9X - are stretched versions of the -200LR and -300ER, incorporating a composite wing and requiring take-off thrust ratings of around 90,000lb and 99,500lb, respectively.

Despite being the incumbent engine supplier for what has become a successful and lucrative widebody progamme, GE is taking nothing for granted. It is ramping up spending on technology for its proposed GE9X.

The company has previously stated that it is spending $50 million on GE9X-related research this year, but GE's GE90 programme general manager Bill Millhaem describes this as "a conservative estimate". He adds that the company expects to double funding for GE9X work next year. "We'll be ready to meet Boeing's timeline," he says.

The lower thrust requirement for the 777X models - compared with that for the 777-200LR/300ER - means that GE is "scaling the engine to the thrust requirement", says Millhaem. There would be a common bill of materials across both variants of the GE9X, meaning the 777-8X would be equipped with a de-rated version of the powerplant for the larger -9X.

The cross-section and architecture of the GE9X are "not dramatically different" to today's GE90, says Millhaem, with efficiency improvements being achieved through the use of advanced materials such as ceramic matrix composites. The overall pressure ratio would be 60:1, compared with 42:1 for the GE90.

The high-pressure compressor (HPC) would feature a "very high" pressure ratio of 27:1, about 17% greater than current-generation engines. It will use an 11-stage HPC - one more stage than used in the GE90. 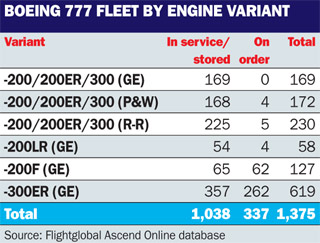 GE is targeting a 10% fuel burn reduction, approximately half of which would be achieved through the adoption of technology used in the GEnx turbofan, which powers the 747-8 and 787. Fan diameter would be 129.5in (3.29m), or 1.5in larger than the GE90.

"We are going to grow the fan diameter a small amount to meet the fuel-burn and acoustic requirements that Boeing has asked us to do," says Millhaem. "This for us trades out to be the optimal fan diameter."

The GE9X would feature GE's fourth-generation composite fan blade. "We have 100 million hours of experience with composite fan blades," says Millhaem. "We'll go to a lower blade count. We're still doing some trades on that." GE will adopt a composite fan case for the GE9X. "This will allow us to take a considerable amount of weight out of the engine," he says.

The combustion system would be a third-generation iteration of the twin annular premixing swirler (TAPS) design, which entered service on the GEnx. Pressure ratio and inlet temperature are to be increased "significantly", while holding emissions "substantially below current and expected targets", says Millhaem.

As the combustion temperature is lower compared with the GE90, the GE9X would be expected to generate 25% less NOx, he says.

Ceramic matrix composites are a technology that GE has gone "all in on". The GE9X would have a CMC HP turbine shroud, and depending on the outcome of ongoing trade studies could also feature CMCs in the combustion chamber and HP turbine (HPT).

"We're pretty comfortable that it's ready. It's one-third of the weight but has a higher temperature capability, so less cooling air is required," says Millhaem. CMCs are, however, more expensive to manufacture than conventional materials.

Advanced materials also play a crucial role in R-R's proposal for the 777X, designated the RB3025. The UK manufacturer is for the first time proposing to adopt a composite fan design for a commercial engine, which would also enable it to introduce a weight-saving composite fan case.

Robert Nuttall, R-R vice-president for strategic marketing, says other technologies that would feature in the RB3025 include titanium aluminide low-pressure turbine (LTP) blades and what it calls a "vortex amplifier". The vortex amplifier aims to simplify the process by which turbine blades are cooled by extracting air from the HPC.

"We've got some innovative cooling technologies in there," says Nuttall.

He says R-R has spent several months working on 777X design iterations with Boeing and remains in "constant dialogue".

The RB3025 - the latest incarnation of the UK manufacturer's successful Trent family - is unique among the engine proposals in being a three-shaft design. Nuttall says this results in a shorter, stiffer and "more robust" engine that provides better performance retention.

"We believe there's an additional 1% [fuel burn] advantage through the life of the engine," he says.

Nuttall declines to say whether R-R would seek a sole-source deal to power the 777X:

"We will clearly only engage in a project where the business case makes sense to us."

For P&W, the 777X represents the first realistic opportunity to deploy geared-turbofan technology - with which it is enjoying considerable success in the single-aisle market - for a widebody application.

"It seems that fits pretty well onto the aircraft as we've studied it. We believe that as our engine is a lot shorter, because of the geared architecture, the engine and aircraft weight characteristics and how we would install the engine look pretty attractive."

In terms of overall pressure ratio, P&W envisages its engine coming in at the "50-55-ish level", says Saia.

"I know the competitors have said as high as 60. We don't really think we need to go to that high a pressure because of the ability of our gear and how we manage efficiency in the engine.

"Today we have two-stage HPT and eight stage-HPC [on the GTF]. We will definitely stay with a two-stage HPT, but as we go up in thrust, the HPC may not change in stage count but the LPC and LPT stage count will change," he says.

Unlike GE, P&W does not see particular utility in using CMCs, opting instead for techniques such as single-crystal and powder metallurgy to produce blades and disks.

"Our plan today is not to use CMCs," says Saia. "It's to use what I'll call conventional materials with enhanced properties and thermodynamic or cooling characteristics, so as to continue to bring efficiency into the core of the engine. There will be continual develoment of materials and coatings."

He points out that some materials come into contention for a larger engine simply because the "mass of the part" is higher. Also, the service life of components in long-haul engines tends to be longer because they run at high temperatures for a relatively short portion of each flight.

"The fundamental work that we're doing today on technology is trying to go higher in gear ratio, and trying to get lighter materials because as we make the engine bigger it gets heavier," says Saia.

"We'll see - with the studies we've done with Boeing - what the optimum configuration is and then at the end, whether we have a viable business return for the amount of investment that we have to make."