IN FOCUS: NetJets business jet shopping spree has its winners and losers

NetJets' record-smashing spending spree this month on $9.6 billion worth of business jets from the Bombardier and Cessna stables is reminiscent of the heydays of private aviation in general and fractional ownership in particular.

Headline-grabbing orders for dozens of new jets became the norm at major industry trade shows in the late 1990s and early 2000s for the world's largest business aircraft operator and fractional provider.

These sizeable deals helped to boost the production lines and profitability of those favoured few manufacturers with products on NetJets' shopping list.

The loyalty to established brands - Dassault, Gulfstream, Hawker Beechcraft (HBC) and Cessna by the then chief executive and fractional ownership pioneer Richard Santulli remained undiminished until his abrupt departure in 2009 from the company he founded.

However, the economic downturn marked a change of strategy for the Columbus, Ohio-based company and its investor parent Berkshire Hathaway. As customer numbers dwindled, it was forced to slash its vast aircraft order backlog. While all the NetJets suppliers suffered cancellations, HBC and Dassault appear to have borne the brunt of the cuts. 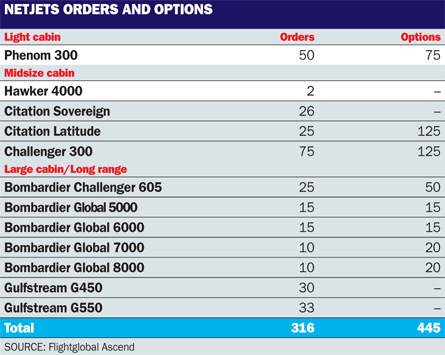 According to Flightglobal's Ascend database, the Dassault order backlog has fallen since 2008 from 91 Falcon business jets to zero today.

During the same period, HBC has seen its order and option tally fall from 236 aircraft across its business jets range to only two super-midsize Hawker 4000s today. The cancellation by NetJets in 2009 of a tranche of Hawker 400XP orders played a major part in the decision to suspend production of this light cabin business jet.

As an added blow, the French and US airframers have been excluded from the operators' latest multi-billion dollar buying sprees.

In contrast, Bombardier has been welcomed into the NetJets family for the first time in the company's 26-year history. The Canadian airframer has chalked up nearly $14 billion of orders and options in the past 15 months from two industry record-breaking deals. These include 120 Global 5000s, 6000s, 7000s and 8000s and 225 Challenger 300 and 605s that will for form part of the company's large cabin, long range and midsize offering. The first aircraft – a Global 6000 - is earmarked for delivery in the fourth quarter

"This is a clear endorsement of Bombardier's product line," says aerospace analyst Richard Aboulafia. "The Challenger 300 order in particular represents another blow to the Hawker 4000, which once looked set to benefit from NetJets."

As a further insult to HBC, Embraer's Phenom 300 looks set to be NetJets' key light jet offering, the company having placed and an order for up to 125 of the type in October 2010.

HBC and Dassault have declined to comment on the recent deals, but NetJets chief executive Jordan Hansell insists its purchase decisions are purely objective. "When we make purchase decisions, we bring in all the relevant departments from across the company to do a top-to-tail analysis of all the competing aircraft and how they will best meet the needs of our customers."

Before the current Phenom 300 order, he says "they had ordered scores of Citation jets and Hawkers". These orders "came with much fanfare and celebration, but resulted in exactly nothing", he adds. "NetJets' recent purchases are an indication the company shops around for the best deal possible, meaning that large orders like these will likely come with heavy discounts and lower profit margins."

The price for winning a NetJets order can be fairly high for the chosen airframer, according to Flightglobal Ascend.

"The Phenom 300 order left Embraer with 25 Citation Ultras, the youngest of which had 11 years of NetJets service behind it," it says. Embraer has sold these aircraft on to a broker, it continues, "but most of them remain unplaced. Meanwhile Embraer has only delivered one Phenom 300 to NetJets".

Hansell says the new aircraft will form part of a "top-to-tail" overhaul of its fleet over the next few years. "We will need new aircraft over the horizon when the market finally recovers," he says.

NetJets' global fleet totals 760 aircraft serving more than 7,000 customers worldwide. Part of the company strategy is to limit the number of fleet types within each of its light, medium and large cabin/long range categories to "no more than two". Hansell says this is "to improve our operational efficiency". Given the Global family is set to dominate the upper end of the NetJets stable when deliveries begin in the fourth quarter, this game plan puts the large cabin Gulfstream G450/G550 - for which NetJets has a 63 orders.

Hansell says the market is finally showing signs of recovery: "It isn't robust, but it isn't anaemic either,". The exception perhaps is Europe, "which is having greater difficulty", Hansell says.

Aboulafia offers a sanguine note: "NetJets now seems to be on the right track. They have the best chance of achieving profitability, although that will likely involve scaling back their ambitions to help firm up pricing. That's the only way forward, given the realities of the market."