The Indian Air Force has completed its trials of the Airbus Military A330 multi-role tanker transport (MRTT) and Ilyushin IL-78MK.

An Airbus Military spokesman confirmed the trials have been completed. The next stages in the competition will be a trials report and the submission of commercial offers.

The air force conducted both ground trials and flight trials. During the flight trials the IAF tested air-to-air refueling with types such as the Sukhoi Su-30MKI and Sepecat Jaguar. Aircraft handling was also assessed.

Airbus Military said the tests included take-offs and landings at the Himalayan airbase of Leh, at an elevation of 10,682ft (3256m), one of the highest air bases in the world. 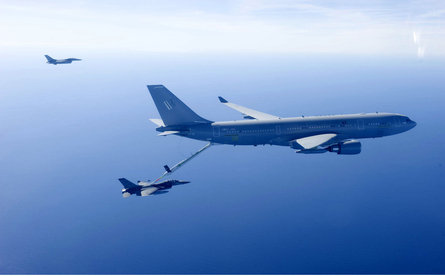 As per the requirement, the A330 MRTT used for the trials was equipped with a three point refueling configuration, with a fuselage refueling unit rather than a boom.

India plans to acquire six tankers, although this number could rise.

Although the IAF operates the IL-78MK, a variant of the IL-76 transport, industry sources In India have said that it favors the A330 MRTT as it feels this aircraft offers more flexibility and lower operating costs. In addition to serving as a tanker, the A330 MRTT has a full-sized airliner cabin and large cargo hold.

In Royal Australian Air Force service, the A330 MRTT can carry 270 passengers in its main cabin and 40 tonnes of cargo in its under-floor cargo hold.

India has also obtained six Lockheed Martin C-130Js, all of which have been delivered. It is widely expected to exercise its option for six more.