It’s difficult to believe a man as busy as Ethiopian Airlines' Tewolde Gebremariam when he says he sleeps as soundly as a baby each night – but not all is as it seems.

“We say in the industry that airline chief executives sleep like a baby. A baby wakes up three or four times in the night,” jokes the airline chief. “It’s four hours, then you wake up, then another four, and you wake up because there are continuous ­concerns running through your mind that keep you awake.”

It’s no surprise that Gebremariam should have a lot on his mind. Since taking over as chief executive in 2011, he has been busy overseeing Vision 2025 – an ambitious 15-year strategic ­programme that calls for Ethiopian to become the largest carrier in Africa, with a $10 billion annual turnover and four hubs to cover the four corners of the continent. 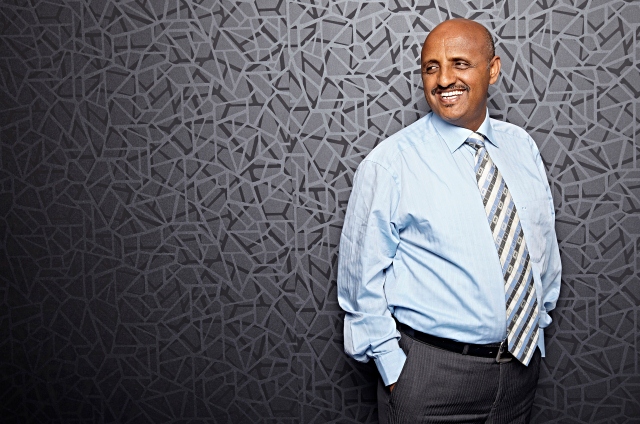 These are some tough targets, but progress has been in the right direction. In 2013, Ethiopian became the largest African carrier by revenue and profit according to IATA, with revenues topping $2.3 billion – the first time in its 69 year history the Ethiopian flag carrier has overtaken rival South African Airways.

The third hub is to open in the Democratic Republic of Congo, giving Ethiopian access to central African markets, while negotiations with the Congolese authorities to jointly ­establish a new airline are under way.

As the economic output of the African ­continent increases, Ethiopian is seeking to leverage on that growth by expanding its fleet and put Addis Ababa at the heart of a global hub and spoke system.

And there is a very pressing reason why the state-owned carrier needs to achieve dominance in Africa’s key aviation markets sooner rather than later. Just across the Red Sea, Middle East ­carriers are tapping into ­African markets and seeking to take ever-larger volumes of the continent’s international traffic through their own hubs. Turkish Airlines is perceived to be a major threat, as are Etihad and ­Emirates. Meanwhile, to the south, Kenya Airways is jostling for position with Ethiopian on some key routes.

But the jovial Ethiopian chief has an answer to the threat posed by Middle Eastern operators. He believes price leadership, strong ­regional connections and an innate understanding of the African market are his key weapons in the struggle.

“Because the competition is getting hotter and hotter, we want to be closer to the ­customer, closer to the region and closer to the market and serve the continent in a better position, whether it’s inter-Africa or Africa to the rest of the world. It’s about getting ­maximum coverage across the region,” explains Gebremariam.

Attempting to compete with the Middle East carriers on levels of service alone is impossible, the Ethiopian boss concedes – so instead the airline is focusing on establishing a ­“global standard of product for the best value” in its Cloud Nine and economy products that will attract the “price rational” ­African traveller.

“We have to serve the customer and give them the best value for money. Of course best service and best product doesn’t always mean best for us, but best value for them. Whether economy or business, we understand the business segment and seek to satisfy that passenger need at the lowest possible cost.

“We are very confident that we know ­Africa better than anyone because we have been serving the continent for the last 68 years. As a veteran, primary African carrier, we believe we know the special needs of the African customers and that we are better placed to serve their needs,” he explains.

NETWORK EXPANSION
Ethiopian’s network strategy is to feed regional African traffic to Addis Ababa and then on to its rapidly-expanding long-haul network. It now covers cities in Europe, North America, South America, Africa, the Middle East and Asia.

New routes to Shanghai, Singapore, Rio de Janeiro and Seoul have been added over the past 12 months. Flights to Manila, Tokyo and Jakarta are planned, and the carrier is studying the practicalities of establishing a base at Dublin that it could operate as a stop-off on routes to the West Coast of the USA. In the far future, Australia is also on Gebremariam’s radar.

Regionally, the flag carrier is busy thickening capacity on its African routes with additional frequencies and capacity. “Today, apart from the north African countries we have covered the entire continent and most of our African services are daily now. In fact, quite a significant number are now twice daily – Nairobi is three times a day now,” says Gebremariam.

What drives his strategy is his firm belief in the huge economic potential of Africa. In a speech delivered at the UK Aviation Club in London earlier this year, he talked of a new “spirit of Africa” transforming the continent into a fertile ground for foreign investment. “It is not the old Africa that was known by the mainstream media of the world. It is today the destination of direct foreign investment. I am not sure if Europe is catching up in ­investing in Africa, but the Eastern world, ­especially China and India, have all been focusing on Africa,” he said.

“The new spirit of Africa came up to tell the rest of the world that the continent is changing. With the millennium development goals, sustained peace and better governments in the last couple of decades, the continent is much, much better than it used to be.”

And he used some pretty eye-opening ­statistics to prove his point.

“When we compare the GDP of the G7 (USA, Japan, Germany, UK, France, Italy and Canada) with that of the E7 emerging ­economies (China, India, Brazil, Russia, ­Indonesia, Mexico and Turkey) we see $29.0 trillion of GDP versus $20.9 trillion, respectively, in 2009. However, in 2050 the G7 will account for $69.3 trillion in GDP and the E7 $138.2 ­trillion… – demonstrating that the global ­economic centre of gravity is shifting east and south.”

FLEETING AHEAD
Confidence in the future of Africa is driving Ethiopian’s fleet renewal programme. The carrier is seeking to phase 32 aircraft into a fleet that has a standing strength of just over 60. The orderbooks include 14 Airbus ­A350-900s, eight Boeing 787-8s on top of six already in service, and two 777-300ERs.

It will complement its narrowbody fleet with the addition of four 737-800s fitted with Boeing’s Sky Interior. In 2014, the ­airline will take delivery of 14 aircraft. It ­already has the youngest fleet of any major airline in Africa.

To continue expansion in the short-haul sector, Ethiopian is seeking to fill a gap in its fleet between its Bombardier Q400s and B­oeing 737-700s and -800s. Consequently, the carrier intends to order ­between 10 and 20 new narrowbodies in the coming months, and the Airbus A320neo, Boeing 737 Max and Bombardier CSeries are “all in contention”, says the chief executive.

“Right now we have an RFP with all the manufacturers of the narrowbody fleet. All manufacturers have responded and a team of experts [from Ethiopian] are evaluating them.”

However, such a rapid pace of expansion comes at a price, especially in terms of the human resources the carrier needs in ever-greater numbers. “The challenge is you need more pilots, more technicians, service readiness, ground support equipment and also new parts provision. It’s something like 20% to 25% growth, so you have to come up resources to support that,” he explains.

To deal with these growing pains, ­Ethiopian is calling on its own resources. The airline’s aviation academy turns out ­everything from cabin crew to technicians and pilots. Annual intake has already risen by 200 to 1,000 and this is forecast to rise to 4,000 in the coming years.

These recruits will not just serve the ­expanding airline but are expected to be hired out to other carriers under commercial contracts to help boost revenues.
Gebremariam does not take sole credit for what has been achieved so far and acknowledges the debt he owes to Girma Wake, his predecessor as chief executive.

It was Wake who implemented the airline’s “Vision 2010” in 2004 to drive up revenue and grow the company quickly but sustainably. The success of that programme, which surpassed all its goals, put in place the framework that Ethiopian continues to pursue.

The plan is to make the government-owned carrier a leaner and more profitable beast. Established in 1945, Ethiopian is one of Africa’s oldest airlines and over the years has built up its own training, cargo, and maintenance, repair and overhaul units.

Vision 2025 calls for these to be ­restructured into several separate businesses which by 2025 will generate at least half of Ethiopian’s revenues by providing outsourcing services to other companies.

On the MRO side, Ethiopian is seeking to win business from African and Middle East-based airlines for maintenance work, sparing them the need to fly aircraft halfway around the world to perform a D-check. A new MRO hangar is under construction.

TOUGH CHALLENGES
Despite this, Gebremariam admits that the carrier has not had everything its own way. While he believes in the potential of Africa, he’s also aware that airlines such as Ethiopian have an uphill struggle, not just to keep Middle East carriers at bay, but also to overturn a historic legacy of European dominance.

“This is a huge concern. If we consolidate, then market share is going to further shrink. So I think all of us have to grow. There is room for us to grow. At least, we should be able to achieve 50% market share. Closer commercial co-operation is the best strategy.”

However, undoing an historic imbalance on the African continent is just one of the challenges that Ethiopian has faced.

In 2012 it took pride in becoming the launch carrier for the 787 in the African market, but had a crisis on its hands less than a year later when one of its Dreamliners suffered a cabin fire due to a faulty emergency transmitter at Heathrow airport.

In February 2014, Ethiopian had a situation no carrier ever wants to have to deal with when one of its aircraft was ­hijacked by one of its own pilots during a flight to Rome. The pilot rerouted the aircraft to Geneva before escaping from the cabin and surrendering to Swiss ­police. Gebremariam refuses to speculate on the causes of that incident until the results of the criminal investigation are known.

Neither event has dented Ethiopian’s popularity with passengers, Gebremariam says. “I would say we handled them quite well. I don’t think that they have left any damage to the brand; the brand is still strong and they were isolated ­incidents,” he says.

Another obstacle is limitations at the airline’s Addis Ababa base, Bole International. “Addis is one of the highest-altitude ­airports in the world. It’s 7,400ft above sea level, which has a significant impact in terms of aircraft performance. On every flight of 787 and 777 we are seeing a reduction in efficiency,” says Gebremariam.

Add a lack of capacity at Bole and you have a mix of challenges that makes it hard for Ethiopian to attain the efficiency it is seeking.

Luckily, plans are afoot to enlarge Bole through a $250 million expansion project that the chief executive says will see the ­construction of a new terminal and a ­doubling of ­capacity at the gateway. Site ­selection has already started.

Further down the line, the Ethiopian ­government is planning to build a brand-new airport at a much lower level to serve Addis Ababa that is being tailored to meet the needs of Ethiopian as it continues its expansion after 2025.