Sitting in the conference room of Air Lease’s satellite office in Dublin, John Plueger flashes a casual California grin, having recently taken over as the chief executive of a company he has spent the past six years building with industry veteran Steven Udvar-Hazy. They have spent the better part of 30 years working together.

During the past three decades, he has seen aircraft leasing grow against a backdrop of several cycles. “We, the lessors, have come to play a larger role in the stabilisation of the airline industry,” he says. “We’ve become buffers for the industry.”

That is one of the reasons he is not so concerned about the next downturn, which several industry experts suggest is looming.

In fact, he sees the amplitude of those cycles decreasing and the period – from peak to trough – increasing. As a result, he is more upbeat about what is to come, predicting that the severe fluctuations seen 20 years ago will not materialise this time around.

“Rather than see this as a harbinger of bad times, I look at it as something we should all be expecting with the backlog on the narrowbodies as big as it is. Naturally, there have to be periods where there are less orders,” he says. 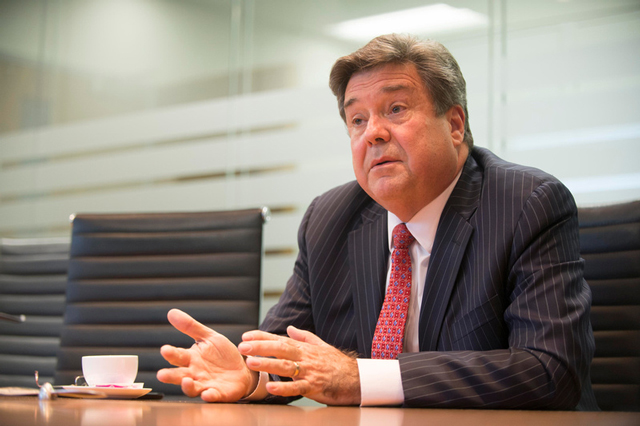 A number of airlines have yet to order narrowbody replacements, and they will continue to require new aircraft. “The manufacturers take all of this into account [and] massage the backlogs quite a bit behind the scenes,” he says, adding that this is an appropriate reaction on behalf of the OEMs and airlines to adjust capacity.

Plueger has weathered several aviation cycles during his career. The single biggest and most positive change in his view is the dramatic growth of aircraft leasing, which gives airlines flexibility in managing their fleets.

Plueger joined ILFC in 1986 as controller. But he didn’t last long in an accounting function, and eventually took top spot at the company as chief executive for a few months in 2011, before joining Udvar-Hazy in his new venture, Air Lease.

About two years after starting work at ILFC, Plueger was negotiating leases and doing deals.

Like many of his peers in the leasing world, he embraced a love of travel and new experiences. That had him volunteering for a trip to Indonesia to negotiate the first ILFC lease of eight 737-300s to Garuda, which had begun to replace its DC-9 fleet.

“This was John’s first deal,” recalls Udvar-Hazy, the executive chairman of Air Lease. “He was involved in a ‘quarterback’ capacity.”

According to Plueger and Udvar-Hazy, no one else was able to make the trip to Indonesia, which would require four stops: Los Angeles to Honolulu, on to Biak, then to Bali and finally to Jakarta.

“It was a hallmark deal because we had just made our first large-spec order with Boeing,” says Plueger.

The Garuda agreement led to further deals with Malaysia Airlines and Cathay Pacific. Soon thereafter, leaving accounting behind, Plueger was doing deals in his new role as vice-president and managing director for Asia.

“We had a lot of fun running ILFC in those years,” he says, regarding what many refer to as the “cowboy years” in aircraft leasing when there were fewer competitors and regulations.

Today, Plueger runs six-year-old Air Lease, with a market capitalisation of $3.8 billion, which he helped to build with Udvar-Hazy. The company has aircraft orders stretching into 2023 – equal to about $28 billion in forward commitments – with total assets valued at about $14 billion.

Of course, Udvar-Hazy is not out of the game; he’s still doing deals and interfacing with airlines in his role as chairman. But after taking over as chief executive in July, Plueger has bottom-line responsibility for the company. “It’s my signature at the bottom of SEC filings,” he says.

Part of his strategy is to protect Air Lease’s investment-grade rating. He says the rating is sacrosanct because it significantly reduces the cost of capital. In fact, with Air Lease’s most recent BBB rating from Fitch, it was able to reduce the cost of its debt facilities by 25 basis points. This is meaningful, particularly when interest rates are predicted to rise.

Maintaining investment-grade ratings will continue to be part of Air Lease’s overall strategy as the company grows.

“History shows that investment-grade companies have much more access to debt and capital on a prolonged basis,” Plueger says.

Plueger gave up his position as acting chief executive at ILFC after only three months to join Air Lease in 2011. He says it was not a simple decision to leave – at the time he was running the largest leasing company by asset value – to establish what was essentially a start-up.

“To open a new shop in my 50s was a pretty big thing,” he says. Each member of the initial executive team at Air Lease, including Plueger, had to take a stake in the company by writing a cheque.

“Writing your own cheque is a pretty big motivator,” he says.

This is a technique often used by private equity firms to ensure management is committed to the company.

When FlightGlobal asks Udvar-Hazy about his relationship with Plueger, he describes him as his “co-pilot”.

“John has the administrative responsibilities, while I am doing more deals. It’s working out as a good partnership,” Udvar-Hazy says, adding that relinquishing the chief executive role has allowed him to spend more time with the airlines and manufacturers, which is what he loves.

In 2011, Air Lease executed its $800 million initial public offering on the New York Stock Exchange. Being a publicly listed company means compliance with strict financial regulations, but it has also allowed Air Lease to use transparency to achieve an investment-grade rating.

As chief executive, Plueger continues to focus on customers and lease deals, but he will also look to identify opportunities for ancillary revenue, as mentioned last July in his first earnings call in his new role.

The company, along with its equity partner Napier Park, recently closed its first asset-backed securitisation deal. The $800 million deal set a benchmark for the lowest A-class coupon for a post-financial-crisis ABS transaction. The company will collect management fees as servicer for the portfolio.

The company raised a sidecar – Blackbird Capital – with Napier Park in 2014. Plueger says Blackbird allows the company to avoid concentration limits in either a specific credit or country, which is important to maintaining ratings. “We’re very mindful of our risk profile,” he says.

“The purpose of Blackbird is to have some adjunct capital,” Plueger says. “The impetus really was that we were turning down transactions because of concentration issues.”

Having a sidecar such as Blackbird allows Air Lease to take advantage of certain opportunities with aircraft types, or to offer a deal for more aircraft to a single credit because those aircraft are not consolidated on the Air Lease balance sheet.

“Blackbird allows us to build business without giving up [business] to competitors,” Plueger says, as he indicates that the market should expect more transactions like the $800 million ABS deal concluded in November.

While some lessors have complained of lower margins given the unprecedented competition in the market, Plueger says the return profile has not changed for Air Lease.

“One thing that has benefited this industry is the low cost of capital,” he says. “Our cost of funds has come down, so we’ve been able to expand our margins a little.”

Air Lease’s debt profile is broken into about 80% fixed and 20% floating, which is selected mostly for shorter funding. Plueger says that these proportions give the company the best balance between fixed-rate costs secured in a low-rate environment, but also flexibility on floating debt.

“We have been anticipating higher interest rates for some time,” he says. The company has an interest-rate adjuster in all of its forward lease contracts, which means there is a rate calculation that is applied to the fixed lease rate at delivery.

Almost all of Air Lease’s aircraft that will be available in 2018 – either coming off lease or from the company’s backlog with the manufacturers – are placed with airline customers. The same holds true for 2019, according to Plueger.

He notes that competition has been fierce in the sale-and-leaseback market, which has driven down lease rentals for certain aircraft types. For Air Lease this is somewhat less consequential because the company participates in sale-and-leasebacks only opportunistically. The company grows with its orderbook, which stands at 366 aircraft, according to Flight Fleets Analyzer.

“Having an orderbook of scale has been a huge advantage for us,” Plueger says. The company spreads out deliveries but holds some aircraft from the order stream to be offered to a customer who perhaps urgently needs an aircraft, for example.

He also says that being a launch customer on certain aircraft types gives the company additional pricing concessions, as well as attractive delivery positions. Air Lease is launch lessor for the Airbus A321LR and A330neo, and the Boeing 787-10.

“It’s really through purchase agreements, opportunistic buying, and the reduction of our overall composite of funds that we’ve been able to preserve pretty good margins,” he says.

Since the inception of the industry, leasing companies have helped airlines to manage their fleets by taking out aircraft where there is overcapacity and redeploying them to another carrier.

For example, lessors have played an important role in Latin America over the past few years as airlines such as Brazil’s Gol have attempted to pare down their fleets in the face of economic turbulence.

“We’ve also learned to profit from volatility; knowing how to make money in good times and bad times,” says Plueger.

As countries become more inward-looking, however, particularly after the Brexit vote in the UK, the election of Donald Trump in the USA and European governments leaning further to the right, some have wondered what the impact could be on aviation.

While Plueger is not worried that people will stop travelling as a result of nationalist tendencies, he expresses some concern about how the actions of the new US administration could influence financial markets. “We do a lot of business in China,” he says. “I naturally wonder how this administration is going to evolve internationally, because this is a global business.”

He is also concerned about the impact of environmental regulation on the aviation community.

But aircraft leasing remains a robust business, with cash flows and returns exceeding many other asset classes in today’s market. “This industry, based upon its performance, will continue to attract capital,” he says.

“It’s about seeing beyond the current day, taking opportunistic advantage and being quick and nimble about deploying your airplanes,” he adds, assuredly noting that lessors are a vital part of global aviation.

It seems fitting that 30 years after jumping at an opportunity to do a deal in Indonesia, Plueger should have been promoted to chief executive of Air Lease, where he will now help to steer the company’s next phase of growth as it continues to play a pivotal role in aircraft finance.