Thai Airways International’s new president Charamporn Jotikasthira is a man on a mission.

Unbothered by being the airline’s third president in less than five years, Jotikasthira says he has a clear understanding of his tasks at hand, and that there is only one road to success.

“If you look at the reform plan, it’s not too different from what other airlines have gone through before. We just need to do it in a disciplined manner. The what to do part, everyone knows. The how to do part is what makes us successful or not,” he tells Flightglobal in a phone interview.

In a bid to stem losses and bring the struggling carrier back to profitability, Thai has announced a restructuring plan which involves selling aircraft and cutting loss making routes.

Part of its restructuring involves the streamlining of its fleet to bring down the number of aircraft types it operates from 11 to eight. Jotikasthira says the carrier will decommission a further 22 aircraft this year.

Thai will also cut “consistently loss-making routes”, and has stopped services to Johannesburg, Seoul, Moscow and soon Madrid. It will also reduce frequencies on services to Frankfurt and London.

To compete with the low-cost operators that have inundated its home ground, it will also transfer up to 10 services to its wholly-owned subsidiary Thai Smile this year. The argument is that Thai Smile, which has a cost base 20% below the mainline carrier, will be operate these services more efficiently.

FlightMaps Analytics shows that Thai has been badly hit on its own turf. The largest players by seat capacity on services within Thailand are Thai AirAsia (29.2%), followed by Nok Air (27.1%) and Bangkok Airways (13.5%). Thai comes in fourth at 13% with Thai Smile following behind at 8.5%. 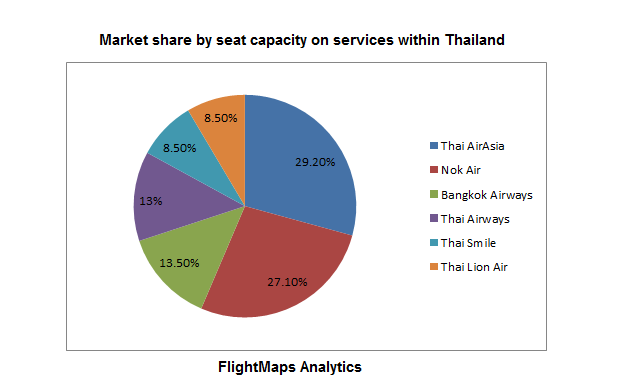 The top three domestic routes are from Bangkok to Chiangmai, Phuket and Hat Yai. 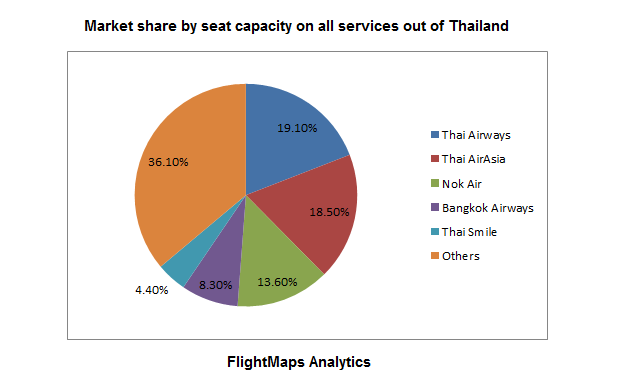 The view is that Thai has for years not adequately addressed the threat of low-cost carriers. It has a 39% stake in Thai low-cost carrier Nok Air, but Jotikasthira tells Flightglobal it could consider selling the stake off if necessary, in a move to mitigate losses on its balance sheet.

Thai Smile meanwhile calls itself a “light premium” carrier, which targets the top end of the low-cost segment. It has been gradually taking over most of Thai’s domestic services, and increasing its regional routes as well.

There is a need for a clear strategy for Thai Smile, which now plays the role of feeding Thai at Suvarnbhumi International, and is also serving point to point routes in competition with low-cost operators. The number of flip-flops in its strategy over the years also does not help matters.

Jotikasthira, formerly the president of the Stock Exchange of Thailand, however, holds the view that the group, as it is, has enough to compete on.

“I don’t see a need for us to set up a low-cost carrier. With Nok in Don Mueang and Thai Smile in Suvarnabhumi, among the two we’ve got both bases covered nicely,” he says.

A silver lining in LCC boom?

His argument is that LCCs have grown the demand for air travel, and what the group needs to do is to capture those who are not already in its customers base by offering a more comfortable product at a slightly higher price.

He is also unthreatened by the entrance of operators such as Thai AirAsia X and NokScoot. He believes the long-haul low-cost model does not enjoy the same advantages as their short-haul peers because of longer flight segments, and hence the gap between their cost base and that of a legacy operator is “much smaller”.

Thai is also working to improve its premium branding to counter Middle Eastern carriers, which are capturing a greater share of the Asia Pacific-Europe traffic.

Jotikasthira disclosed that the airline is revamping its business class product – both in terms of service and offering, which will be unveiled within a year.

With a clear vision, the only challenge in the new president’s way looks to be possible political interference which have prevented former presidents from bringing the airline to its full glory.

Jotikasthira however dismisses that, saying the support from the government is clear.

“They give us full support subject to us achieving the plan. There is only one road, and that is to executive the plan accordingly,” he says.

“I don’t think any government that comes in the future would change things, because there’s no other way out besides doing the reform in a disciplined manner.”