The Israeli air force’s elite aerial firefighting squadron, that operates 14 quick-reaction AT-802F Air Tractors, could be declared fully operational within weeks, according to the group's commander.

Born of tragedy, the unit was stood up in 2011 after the “deadliest fire in the history of Israel” – the Mt Carmel blaze of December 2010, in which 44 people died.

Speaking at the Aerial Firefighting International convention in Sacramento, California on 23 March, 249 “Fire Birds” Sqn commander Lt Colonel Eran Ben-Shabat said within four months of that tragedy, the decision was taken to establish a central firefighting command with seven zones, and to procure eight AT-802F fire bombers for immediate use in the 2011 fire season. 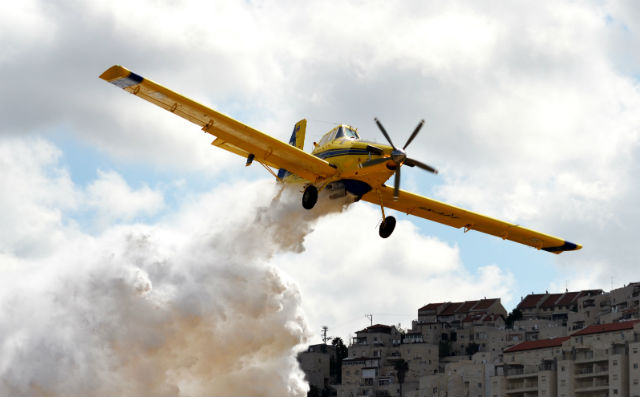 The fleet has since grown by six Air Tractors, to 14. Those were selected over four Bombardier CL-415 Superscoopers, which went out of production in 2015 because of a lack of orders.

Ben-Shabat says full operational capability will be declared following an assessment next week.

The firefighting unit’s first international deployment will be to Cyprus this year, where the Fire Birds will train alongside local crews.

They will be co-located alongside the Air Tractors to create a potent mix of rotorcraft and fixed-wing firefighting assets that can respond anywhere in Israel “within five to 10mins”, he says. The unit will also support the Palestinian territories when needed.

“In 2017, the air force will finish development and deliver it to the police,” Ben-Shabat says.

The entire operation – from aircraft procurement to maintenance and airstrip operations – is supported by Elbit Systems. In January, the company received a $100 million contract for the remaining six Air Tractors and eight years of contractor support from Israel's defence ministry.

The type's command and control system is provided by Tel Aviv-based C4 Systems. The networks allow commanders and firefighters at all levels to see where every reported fire is, and where each aviation asset is flying. The pilots use touch-screen computers to navigate to the objective area.