Revitalised over the last couple of years as part of the Finmeccanica empire, Italy's Alenia Aermacchi is increasingly in evidence in competitions for aircraft and training systems in both the basic and advanced jet trainer (AJT) sectors. Its hopes are currently pinned on securing first orders for the M-311 and M-346, while limited sales and upgrade orders continue to come in for its legacy MB-339 and SF-260 platforms. 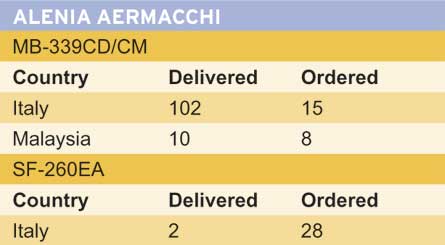 Having been frustrated in an early attempt to bid the M-346 against BAE Systems' Hawk 128 for the AJT element of the UK's Military Flying Training System (MFTS) requirement and also in Singapore, where its M-311 lost out to the Pilatus PC-21, Alenia Aermacchi is looking to the United Arab Emirates as a potential launch user for both its new types. The UAE last month shortlisted six platforms to contest its two-tier training requirement, with Alenia Aermacchi the only company to be involved at both the basic and advanced stages.

Derived from the S-211 unsuccessfully bid to meet the USA's Joint Primary Aircraft Training System (JPATS) requirement, the turbofan-powered M-311 has been reborn with a glass cockpit and claims of turboprop-type operating costs. An avionics demonstrator conducted its first flight in July 2004 and has flown more than 180h. The type is pitched against designs such as the Pilatus PC-21 and Raytheon's T-6 Texan II - the platform that secured the massive US Air Force/Navy JPATS deal in 1995.

The M-311 boasts a CMC-supplied cockpit with three multifunction displays and a head-up display for the front-seat student, and can fly significantly faster than its turboprop rivals, the company says. Nations viewed as potential customers for the M-311 include Australia, Chile, Jordan, Libya and Tunisia, while the type is also being promoted to sit beneath the Hawk 128 in the UK's wider MFTS infrastructure. The M-311 has an expected airframe life of 15,000 flight hours, and a prototype will be ready next year.

Spawned from a joint project between Aermacchi and Russia's Yakovlev, the Alenia Aermacchi M-346 is also looking for its first contract, although the type is the front runner to deliver the AJT element of the proposed nine-nation Eurotraining system - potentially for 200 aircraft.

First flown in June 2005, the M-346 is also in contention in the UAE competition and is a candidate for a Greek air force project to replace the service's Rockwell T-2 Buckeyes. Athens is expected to issue a request for proposals for the project from next month. The Italian manufacturer also lists Malaysia, Poland, Portugal, Singapore and the USA as potential buyers of the type. Two prototypes have flown 280h and the first production standard example will roll out this year. Low-rate initial production of 12 M-346s will start in 2009.

Alenia Aermacchi has, meanwhile, revived its production line for the 30-year-old MB-339 to meet a new order for eight CD-standard examples for the Malaysian air force and 15 for the Italian air force. These deals are expected to see the type remain in production until 2013, while the company will also upgrade 12 Nigerian air force examples. The Italian air force is also in the process of fielding 30 new-generation SF-260EA primary trainers, the first two of which have now been delivered.