Air freight traffic declines showed some signs of improving in June but business remains “exceptionally challenging”, according to the latest IATA market wrap-up.

The airline association’s latest data shows that air cargo demand in cargo tonne kilometre (CTK) terms declined by 17.6% year on year in June, which is a “modest” improvement on the 20.1% drop recorded in May. Over the first half of the year, demand was 14.5% down on a year ago.

In contrast, load factors continued to improve during June and were up 11.5 percentage points on a year-ago at 57.3% as a result of capacity dropping by 34.1%.

Much of the decline in capacity was down to the grounding of passenger services, which led to a 70% decline in bellyhold capacity, partially offset by a 32% increase in freighter capacity. 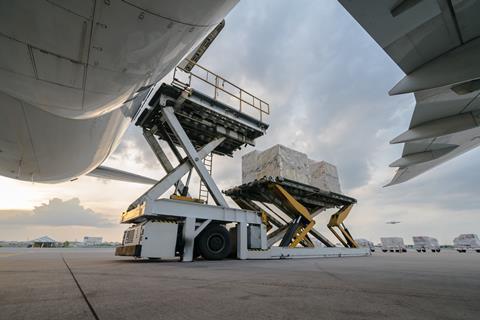 IATA director general Alexandre de Juniac said that there were still challenges ahead for the industry.

“Cargo is, by far, healthier than the passenger markets but doing business remains exceptionally challenging,” he said.

“While economic activity is restarting after major lockdown disruptions there has not been a major boost in demand.

“The rush to get personal protective equipment (PPE) to market has subsided as supply chains regularised, enabling shippers to use cheaper sea and rail options.

“And the capacity crunch continues because passenger operations are recovering very slowly.”

The airline association also pointed out that economic indicators, which act as a bellwether for air cargo, were also showing signs of picking up, although air cargo was not moving as fast as the indicators suggest it should.

IATA said the new export orders component of the Purchasing Managers Index (PMI) recorded its strongest monthly increase since the series began in 1999.

Looking at regional performance, it was declines across the board, with European and Latin America-based carriers suffering the most.

In Europe, airlines reported a 27.2% drop in cargo traffic, which was a slight improvement on the 29.5% drop registered in May.

Latin America-based airlines saw their cargo traffic drop by 33.2% year on year in June while capacity was down 52.3% which indicated “a sizeable capacity crunch”.

“The Covid-19 crisis is particularly challenging at present for airlines based in Latin America owing to strict lockdown measures,” IATA said.

Asia Pacific-based airlines registered a 21.6% decline in demand for the month, which is actually higher than the 18.8% drop recorded in May.

The airline association said that despite manufacturing starting to pick up in the region, demand was impacted by the reduction in shipments of PPE by air.

In North America, airlines saw cargo demand drop by just 0.4% compared with last year thanks to domestic demand. IATA said that “resilient performance” in its international volumes is due to the large freighter fleets of a few of the region’s airlines as well as the fiscal support to airlines in the US from the CARES Act.

Middle East-based carriers reported a decline of 19% year on year in June, an improvement from the 24.9% fall in May.

“This was driven by the aggressive operational strategies of some of the region’s carriers.”

Finally, Africa-based airlines saw cargo traffic decline by 14.8% year on year in June, which is a drop from the 7.3% decline in May, as the region suffered from the effects of the pandemic becoming more severe in June.