Half a year into his tenure as chief executive of Pakistan International Airlines, Bernd Hildenbrand says the troubled carrier is finally making some progress in the expansion of its fleet and network, after years of consistent losses.

While plans to privatise the airline have not gone smoothly, the airline boss believes that this should not affect PIA's goal of revenue generation and providing a good service.

After several deferments, the Pakistan parliament passed the PIA Conversion Bill (2016) in April, which formalised PIA's status as a public limited company, while stipulating that it must be at least 51% owned by the federal government for two years.

In an interview with FlightGlobal, Hildenbrand says the privatisation process is not an easy one, with various parties having to come to a consensus. As such, time is required for a smooth transition.

He adds however: “Whether or not we privatise, we have to make money and do a good service. [The privatisation process] is beyond our control, but it really makes no difference to us.”

The German is confident that the matter will be resolved “sooner or later”, adding that he has had up to seven meetings with Pakistan’s prime minister Nawaz Sharif. 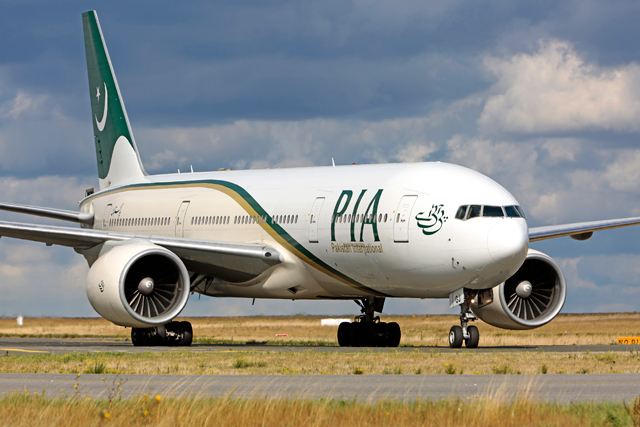 “My meetings with him (Sharif) show that the government is interested in helping the country’s aviation market grow in the right direction. It is a lot of fun for me to discuss aviation with him. We have a role to play in helping Pakistan connect with the rest of the world.”

To that end, PIA launched its new business class product "PIA Premier" in August, on the first of three 297-seat Airbus A330-300 aircraft wet-leased from SriLankan Airlines. The jet operates six-times-weekly services from Islamabad and Lahore to London.

“We simply needed a new business class product. The last one was 10 years old, and people were not fond of it,” says Hildenbrand, adding that load factors for “PIA Premier” now averages at 85%.

In its bid to expand, Hildenbrand emphasises that that PIA cannot rely on the government for funds, lest it becomes a copy of its neighbouring, rival flag carrier. Rather, new funds for expansion should be generated from PIA’s own cash flow.

Hildenbrand estimates that the airline will need four to eight more A320 family jets over the next three to four years, before it seeks to acquire its re-engined variant.

“We only want second-hand models for the aircraft, and not brand new ones,” he says, referring to the A320neos. “I do not want to be a guinea pig for new aircraft. Let them fly for three to four years, and in five years time, we should be ready.”

He also disclosed that Boeing has presented an option for PIA to convert its order for five Boeing 777-300s into eight 787-8s. Hildenbrand says discussions are underway but that no decision has been made.

The airline is currently operating at 99% regularity, with on-time performance at 85%.

Besides working on expanding its fleet, PIA also wants to grow its international network by “recovering lost markets”.

The state-controlled carrier currently serves an extensive domestic network from its primary hub at Karachi and secondary hubs at Islamabad and Lahore.

Hildenbrand says PIA is not looking to make any route cuts “in the near future”, but that it is seeking to restart services to Barcelona and Bangkok over the next four months.

Flights to Barcelona will resume in November, while those to Bangkok will follow in January 2017.

Data from FlightMaps Analytics shows that PIA last flew to Barcelona from Islamabad in February 2015. It also last operated services to Bangkok from Lahore and Islamabad in June and November 2013, respectively.

In addition, PIA will replace its current Manchester stopover with Leipzig/Halle on its Lahore-New York JFK route from January 2017.

“We are not a one-hub airline, and have a duty to connect over 220 million people from Pakistan to the world. We are also looking to add more destinations and frequencies in Asia, as we had lost some markets previously,” says Hildenbrand.

PIA will also increase its slots at London Heathrow from 10 to 14, as well as raise its frequency to Toronto by three to four times. Discussions are however still underway with the relevant authorities.

Hildenbrand adds that the Middle East is another potential growth area, as PIA seeks to counter the increasing threat of Gulf carriers.

“We were getting killed by them. The Gulf carriers have more than 300 flights a week into Pakistan, and we have strategies to defend ourselves.”

FlightMaps shows that PIA flies to 12 destinations in the Middle East. They include Jeddah, Kuwait, Doha, Dubai, Abu Dhabi and Muscat.