The first phase of the redevelopment of terminal B at New York LaGuardia airport is behind schedule, though Moody's Investors Service believes the $4 billion project remains on track.

The eastern half of the new concourse B was scheduled to open to airlines in May but is now expected to occur in September, the ratings agency says in a report today. Issues with the facility's glass curtain wall delayed construction.

Despite these delays, Moody's expects the new terminal headhouse to open on schedule in 2020, and substantially complete the works in 2022, it says.

Pictures posted on 19 July by concessionaire LaGuardia Gateway Partners show jet bridges installed on the new concourse B but a significant amount of interior work remaining. 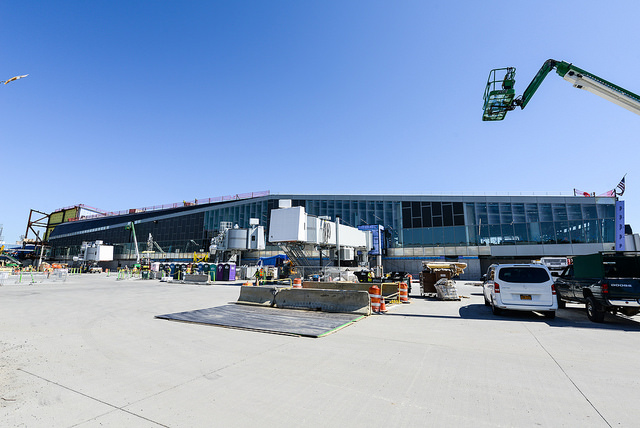 "The overall terminal B redevelopment is generally on schedule and we are looking forward to opening concourse B later this year," LaGuardia Gateway Partners tells FlightGlobal. "The original two construction phases of concourse B moved to a consolidated phase and single opening approach to better serve passengers and ensure there were as few disruptions as possible."

The concessionaire plans to open the first 11 gates on the concourse this "fall", it says. 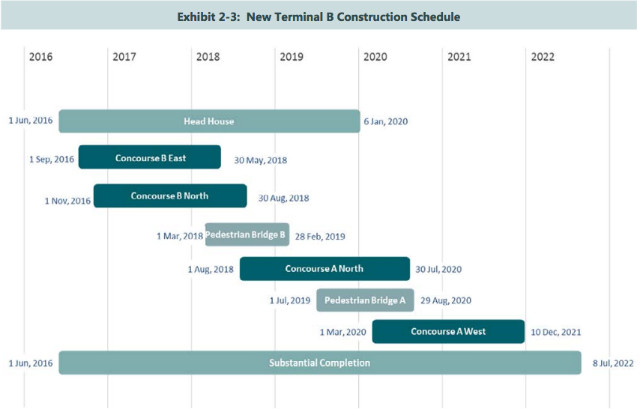 The initial construction phasing timeline for terminal B, 2016

The terminal B project will replace LaGuardia's antiquated central terminal building that opened in the 1960s with a new modern 35-gate facility. LaGuardia Gateway Partners is owned by a consortium of private investors, including Meridiam, Skanska and Vantage Airport Group.

The concessionaire must complete concourse B and relocate airlines to the new facility, before it can begin demolition of the existing concourses A and B to prepare for the next phase of construction.

Moody's estimates that the delays to concourse B will cost the concessionaire roughly $6.4 million through September, or less than 1% of the concession contract.

LaGuardia Gateway Partners, which will operate the terminal once it is complete, has not said what airlines will use the new concourse when it opens.