The company says the centre fuselage is the core of AX-5, Japan’s fifth example, and will become the first to enter Japan's Nagoya final assembly and checkout plant instead of prime contractor Lockheed Martin’s facility in Fort Worth, Texas.

“It is the 207th centre fuselage that the company has produced at its Palmdale site, and the 30th such unit delivered this year,” the company said in a 4 October statement.

“[MHI] will perform final assembly and checkout of the Japanese F-35As. The process includes mating the centre fuselage to the forward fuselage/cockpit and wings produced by Lockheed Martin, and the aft fuselage produced by BAE Systems.” 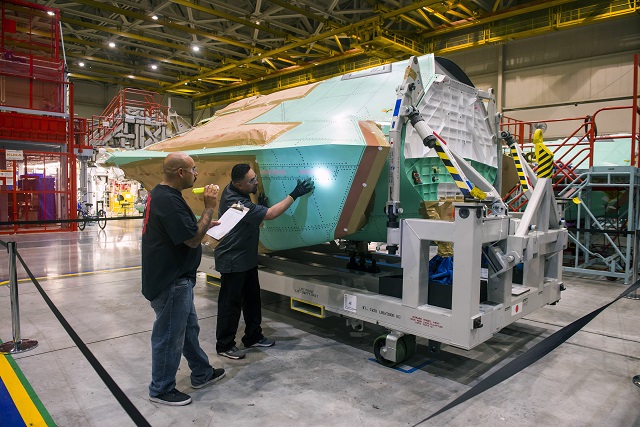 Last month, Northrop announced it is shortening the production cycle for F-35 centre fuselages at Palmdale from 11.5 months to 10 to meet a planned production ramp up.

Japan intends to purchase 42 conventional variants of the F-35 to replace the McDonnell Douglas F-4 Phantom, and has expressed interest in procuring more jets to replace a portion of its Boeing F-15 fleet.

Under a licensing agreement signed in 2013, 38 aircraft will be assembled in Japan and the first four are being delivered through Lockheed’s Fort Worth plant. The first aircraft is expected to roll off the Nagoya line in 2017.

Those four aircraft are already under construction as part of the eighth low-rate initial production lot, and Lockheed F-35 program manager Lorraine Martin says the first example will be ready in the second quarter of 2016 ahead of checkout and delivery to the Japanese government later that year.

Italy also opted to assemble its aircraft domestically at its Cameri plant, operated by Alenia Aermacchi. The local example completed its first flight in September.