The deal, disclosed by the Canadian manufacturer, has a list-price value of $190 million.

"We congratulate the government of Uganda for the revival of its national flag carrier, and are thrilled that the new airline has selected Bombardier and the CRJ900 regional jets for its upcoming debut,” states Jean-Paul Boutibou, the airframer's vice-president of sales for the Middle East and Africa.

Bombardier indicates that the CRJ900s will be operated under Uganda Airlines branding, in a dual-class configuration with 76 seats, including 12 in first class.

A previous incarnation of Uganda Airlines was liquidated in 2001, after 24 years of operation.

Its successor will be the first carrier to operate the new CRJ-series Atmosphere cabin in Africa. 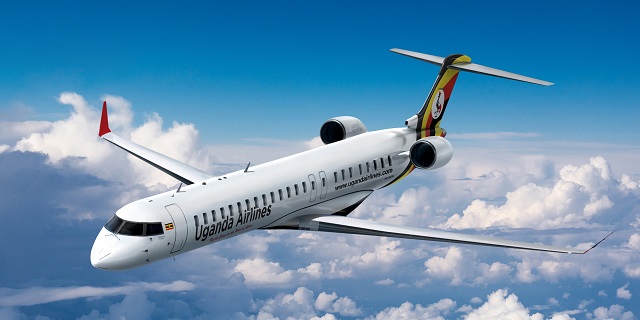 "As we were establishing Entebbe as a strong hub in East Africa and building more connectivity in Africa, we thoroughly reviewed our needs," states Ephraim Bagenda, chief executive of Uganda National Airlines. "With its proven track record in Africa and other regions of the world, we are confident that the CRJ900 aircraft will help us succeed."

Bombardier says 21 operators deploy a combined 58 CRJs in Africa and, that including today's deal, a total of 1,957 firm orders for the aircraft has been accumulated.

Flight Fleets Analyzer indicates that 1,689 CRJs have been delivered. Of these, 1,419 are in service and 270 in storage.