Embraer has delivered Japan’s first E190 to J-Air, which will deploy the aircraft on its first revenue flight on the Osaka Itami-Kagoshima route on 10 May.

The aircraft, registered JA241J, is powered by General Electric CF34 engines and features a dual class cabin with 15 business and 80 economy seats.

This is the second E-Jet type to be operated by the Japan Airlines subsidiary, which has a fleet of 17 E170s in service. The only other E-Jet operator in Japan is Fuji Dream Airlines which has seven E175s. 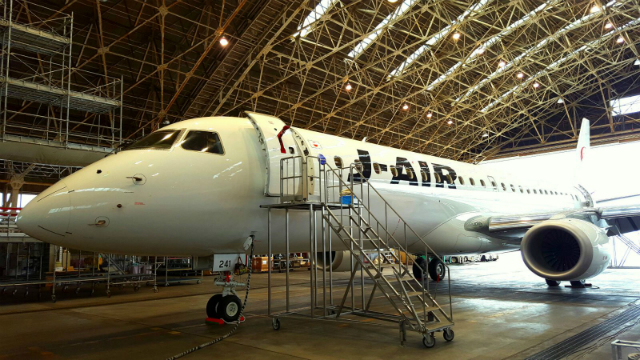 “The E-Jets have proven their ability to help airlines maximise yield, and sustainably enter new markets, as in the case of Japan Airlines,” says Paulo Cesar Silva, president and chief executive of Embraer Commercial Aviation. “The extra capacity offered also reflects the steady growth of the domestic market.”

“The combination of the existing E170s and new E190s in our fleet will give us greater flexibility to match our products and services to customer needs. We are confident that the E190, with our new cabin interior will deliver a refreshing and comfortable in-flight experience to customers,” says Tetsuya Onuki, J-Air’s president.

J-Air is scheduled to take delivery of a further three E190s this year, one each in May, August and October. All nine aircraft will be delivered by the end of 2018.