Chief executives from several Star Alliance member carriers admired the Bombardier CSeries, aboard the first passenger flight aboard the aircraft.

Carsten Spohr, chief executive of the Lufthansa Group, called the flight on 3 June a “very special day” that was the culmination of a decade of work between Bombardier and the group, whose Swiss subsidiary is the launch customer of the CS100.

“10 years ago, Lufthansa thought it was the time for a third supplier in the narrowbody market,” he says. “And we thought Bombardier was the right provider for that.”

“Today was probably the most important departure we’ve had yet,” said Fred Cromer, president of Bombardier Commercial Aircraft, aboard what was deemed the first "semi-commercial" flight on 3 June.

Cromer continues to face pressure to sell the CSeries, despite recent headline orders from Air Canada and Delta Air Lines. He and his sales team face criticism from competitors over steep discounts they have provided to land orders.

Still, Cromer is optimistic about the programme, saying Bombardier has met the sales targets it set out for itself at the Paris air show in 2015.

Chief executives from many of Star’s 28 member carriers joined Spohr and Cromer on the 1h 50min flight from Dublin to Zurich. The mood was jovial onboard with many of them chatting amongst themselves and touring the aircraft. 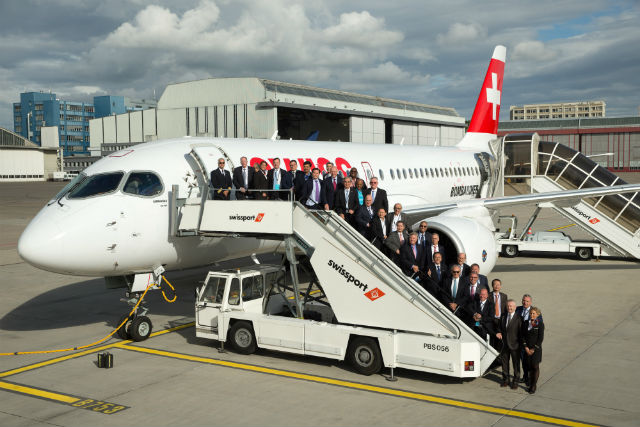 The flight aboard CSeries flight test vehicle five was operated by Bombardier on behalf of Star and Swiss.

Calin Rovinescu, chief executive of Air Canada, says that he is happy with the choice of the CSeries aboard the flight to Zurich. The aircraft is “perfect” for the airline’s network that includes many long and thin routes across Canada, he adds.

“We’re not in a competition with any other airplane,” he says when asked when Air Canada will finalise its order for the CSeries. “It’s this airplane.”

Some details of the order for 45 firm CS300s still need to be worked out but the carrier will finalise the order in due course, says Rovinescu.

“There were a lot of smiles so, we’ll see,” says Rob Dewar, vice-president of the CSeries aircraft programme at Bombardier, when asked if he had secured any orders from the flight after landing in Zurich. “It doesn’t hurt to show [the aircraft] off.”