Injecting a unique new design into the amateur-built aircraft market, Commuter Craft announced plans to launch production of the experimental-category Innovator in the fall of 2017.

The second aircraft — a production-conforming design — is now in final assembly, he says. Five Alpha-model kits will be assembled by owners at the factory starting this fall, testing a range of power settings, he says. A Beta-model will be tested next spring, leading to general production of a final configuration in about 14-17 months, he says.

Although demand for amateur kit-built designs has waned over the decades, Commuter Craft was founded on the premise that improving safety is the key to attracting new business, Hogan says. Commuter Craft has sized the factory to deliver and assemble 150 Innovator kits a year, with 32 slots already secured with deposits. 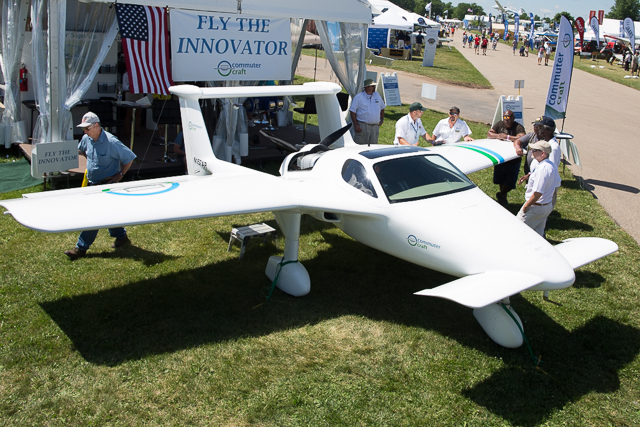 The aircraft received its unusual configuration to satisfy a design requirement to prevent the aircraft from entering a stall-induced spin on the final turn before approaching a runway, Hogan says. Though a common manoeuvre, the slow-speed turn is linked to thousands of deaths of general aviation pilots over the years.

The blended-wing, three-surface design includes a canard to resist a stall of the main wing. High-taile he canard, however, creates a requirement for a high-speed approach, in order to prevent the canard from stalling, Hogan says. To solve that problem, Commuter Craft added a horizontal stabiliser on a twin-boomed, high-tail.

In the long-term, Commuter Craft is working on developing new versions of the Innovator series, Hogan says. A more ambitious goal, however, is to move beyond experimental kit-built designs and launch manufacturing of certificated aircraft. A new four-seat trainer would be the first such aircraft to emerge, Hogan says.

Unlike the Innovator series, Hogan expects the trainer aircraft to present a more conventional look. Hogan does not yet disclose details of the design, but notes that Diamond Aircraft’s high-aspect ratio, glider-like approach is similar to his own design philosophy for an ideal trainer.