The first green Embraer Lineage 1000 business jet has arrived at PATS Aircraft Completions in the USA to be outfitted for its Middle Eastern buyer.

The first 19-seat Lineage 1000, which is based on the Embraer 190 large regional jet, is scheduled to be delivered to Aamer Abul Jalil Al Fahim in mid-2008 and based in Abu Dhabi, where it will be operated for private use.

Following its first flight in Brazil on 26 October, the $49 million aircraft arrived at PATS' Georgetown, Delaware completions facility on 16 November for installation of the interior, designed by UK company Priestman Goode. 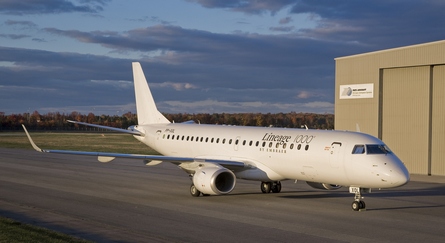 PATS has a contract to complete 35 Lineage interiors over a 10-year period, with throughput increasing from four aircraft a year initially to eight a year by 2010. DeCrane Aerospace, the parent company of PATS, is supplying most of the cabin interior, including seats, panels, entertainment system and cabin management system.

Embraer says its modular interior design combined with DeCrane's sole-source completion responsibility will result in faster turn-around times. The contract calls for PATS to reduce turn time to five to six months by the fourth aircraft. This is a third to half the time required to complete similar large VIP aircraft, says Embraer.