Elbit Systems has unveiled the latest addition to its unmanned air vehicle product line, and expects the new Hermes 900 to fly for the first time before year-end. The design has a 15m (49.2ft) wingspan and a 970kg (2,140lb) maximum take-off weight, including a 300kg payload. 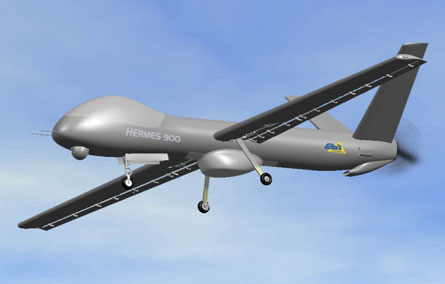 The Israeli company says the UAV will be capable of all-weather operations and features an independent automatic take-off and landing system, which will enable it to recover to a non-instrumented runway if required. The Hermes 900 is powered by a 115hp (86kW) Rotax 914 engine and has an expected endurance of 40h.

Control will be via Elbit's universal ground control station, which can manage operations of two UAVs at any given time, with the air vehicle to carry a line-of sight datalink and satellite communications equipment.

Elbit's UAV range already includes the Hermes 180 and Hermes 450 vehicles, the latter of which also forms the basis for the British Army's future Watchkeeper tactical UAV.