Lockheed Martin is rushing a software fix to Hawaii after 12 US Air Force F-22A Raptors en route to Japan for the stealth fighter’s first overseas deployment had to turn back because an unspecified problem with their navigation systems.

The F-22s, of the 27th Fighter Squadron from Langley AFB in Virginia, were en route from Hickham AFB in Hawaii to Kadena AB on Okinawa for a three- to four-month deployment. They are expected to try again by the end of the week, after the software fix is incorporated and tested. 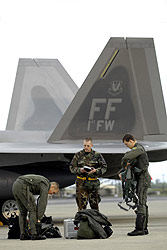 Asked to comment on rumours the problem related to crossing the international dateline, the USAF said: "The aircraft experienced a software problem involving the navigation system en route from Hickam to Kadena. For operational security reasons we will not discuss specific aircraft systems or locations."

Taking delivery of the first F-22 for the Pacific Air Forces at Lockheed’s Marietta, Georgia plant on Monday, USAF Gen Paul Hester said the reason for sending the Raptors to Kadena is “to learn how to deploy with the F-22. We get a manual with the aircraft and we are learning every day the capabilities built into the aircraft.”

PACAF’s F-22s are being delivered to Langley for training, with the first eight aircraft to arrive at Elmendorf AFB in Alaska in August and two squadrons to be operational by the end of 2008. Eventually, Raptors will also be based at Hickam.