Aviation Partners is warning airframe manufacturers that it is ready to defend its proprietary rights for its blended winglet technology.

Talking exclusively to Flight Evening News, Aviation Partners chief executive Joe Clark said that too many original equipment manufacturers are going down the road of being “copycats” and developing blended-winglet technology similar to that produced by his company. “I like to call them ‘pretendlets’,” said Clark. “When you look at some of the other aircraft in the static display here, many of them are borderline on our patents – looking too close for comfort,” said Clark. “There’s a saying: if it looks like a duck, quacks like a duck and flies like a duck – maybe it’s a duck. If it gets any closer, we may get our technical guys to analyse them for patent infringement.”

Clark added that while manufacturers such as Bombardier and Boeing are willing to pay for Aviation Partners’ blended-winglet technology, many are looking to work around their patents and try and manufacture something ‘cheaper’.

“With Raytheon producing its own pretendlets, many customers are asking if they can buy a Hawker [without winglets] and put our blended winglet on them. We always answer ‘speak to Raytheon’. In fact, just last week we talked to a customer with a Hawker 850XP who asked if we would be able to take off their winglets and put ours on. We said we would take a look at it.

“Most [airframers] don’t get it. There’s a reason why we have patents. If they try and get round it they don’t quite get the same results. Some have vortex generators, but if designed properly you don’t need vortex generators.”

Despite Clark’s warning, he said Aviation Partners has “never been busier”. “We’ll produce 50 shipsets this year and 70 for next year for the Hawker. We’re also looking to produce 500 for Boeing this year and 700 next. Everyone wants to save fuel in this day and age – not only for cost, but also because it is the responsible thing to do.”

Aviation Partners says it is developing winglets for three new aircraft – for a manufacturer it works with already and a new partner. Clark would not be drawn whether this would involve the much-vaunted “spiroid” blended winglet as originally tested on a Gulfstream II in 2001. “We will be due to make a major announcement at NBAA in November. All I can say is that people are going to see some different looks with even better performance,” he said. 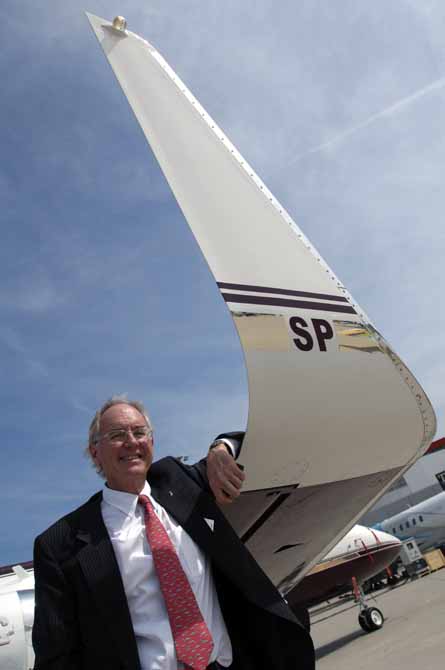