​Airbus aims for airliner cockpit-touchscreen first with A350

Airbus aims to be the first airliner manufacturer to debut cockpit touchscreen technology and is currently testing the concept on its A350-1000 development aircraft.

“We will soon deliver touchscreens [on the A350] to a launch operator,” says A350 XWB marketing director François Obé. “I cannot give you a timescale…but it is coming soon.”

He adds that Airbus has “customers already” for the technology and will be “the first to introduce these screens”.

The A350 cockpit is equipped with six identical large-format displays - five side-by-side across the main panel and a sixth located centrally between the two pilots (below). The current plan is to incorporate the touch-control function on the two outboard screens – which serve as onboard information system (OIS) displays – and the central multi-function display (MFD). Each pilot currently interfaces with these displays using individual keyboard and cursor control units (KCCU) on the centre pedestal or keyboards mounted on each fold-out table.

The OIS displays provide electronic flightbag functions while the central MFD contains interfaces for systems such as navigation and flight management. The displays can also be swapped between the different screens.

The touchscreen technology currently being tested on experimental displays in the A350-1000 test aircraft has functionality similar to a tablet, including a pinch-and-zoom function.

Obé says technology allows the centre MFD to be controlled by both pilots simultaneously, whereas currently only one pilot can operate the screen using their corresponding KCCU.

Obé adds that the ability to swap displays between screens means that flightcrews will be able to interact on the OIS together when the display is moved to the central MFD. 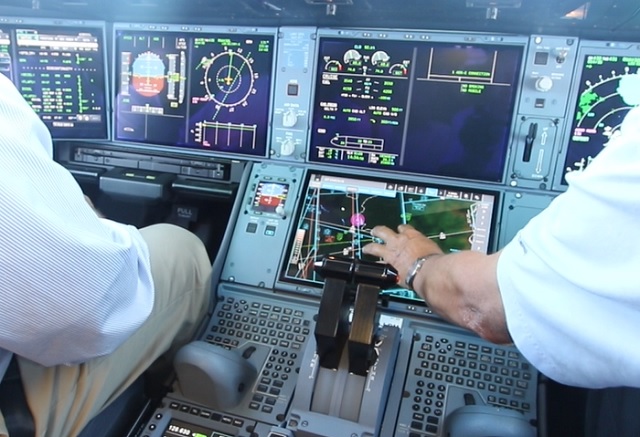 Airbus senior experimental test pilot Peter Chandler, who demonstrated the system to journalists during a test flight from Toulouse this week (above), says that the KCCU interface can be used when flying through turbulence when it proves difficult to use the touch controls.

Boeing will debut touchscreen technology on the 777X when it enters service in 2020. This 777 major derivative incorporates a flightdeck based on that of the 787 but with the screens’ existing cursor control devices replaced by Rockwell Collins touchscreen displays.