An all-French bid to devise a technical path to hybrid-powered flight highlights one of the most daunting challenges facing engineers looking to enlist electric propulsion in the battle against noise and emissions: the high voltages required by such systems.

As Philippe Lagarde, hybrid propulsion roadmap manager for Safran Helicopter Engines, tells FlightGlobal, the “big challenge” impending for his company’s contribution to the EcoPulse project – a collaboration also including Airbus and Daher – is to manage the distribution of more than 500 volts, a level he describes as “completely new” in aviation.

That much potential, he says, will demand special cables and protection. Safran has developed component parts, however, so the challenge for his team over the coming months lies in integrating a propulsion system into the TBM aircraft being used as a testbed.

EcoPulse, revealed at the Paris air show in June, is an ambitious attempt by the three partners to combine hybrid-electric power with distributed propulsion – in this case six electric motors mounted to the TBM's wing, in addition to the nose-mounted main propeller. A maiden sortie is planned for 2022.

Combined, the trio will invest €11 million ($12.3 million) in the project, a sum to be matched by the government of France through its CORAC civil aviation research council.

Safran will deliver the hybrid propulsion system, excluding batteries – a turbogenerator to replace the main turboprop engine with a unit capable of delivering thrust directly to the nose propeller, and also charging batteries to drive the secondary propellers, electric power management and integrated electric motors and propellers.

Airbus’s contribution will be aerodynamic modelling to direct configuration and development of flight-control laws, and the high-energy density batteries. Daher will undertake component and systems installation on its airframe, and carry out flight testing.

Lagarde says that first flight could be followed by up to a year of testing to define a follow-on project – probably a commuter aircraft of a sort that might be built by Daher. EcoPulse, he stresses, is only a demonstrator. But success could establish the technical characteristics of an aircraft quiet enough to operate from secondary airports.

Critically, he says, the hybrid system must deliver a net reduction in engine emissions and noise if it is to improve on the very efficient single turboprop engine and variable-pitch propeller system that drives standard TBM aircraft.

To convert mechanical engine power to electricity costs energy, but the EcoPulse team believe the hybrid system can recover that, and more. First, says Lagarde, the thermal engine can run more efficiently because it will be optimised to power the aircraft at cruise – the battery-powered, wing-mounted secondary propulsors will deliver the extra power needed at take-off. Drivers of hybrid cars will be familiar with this fuel-saving technique, where the internal combustion engine gets an accelerating “turbo boost” from the electric motors.

Second, the wing-mounted propulsors will cut overall drag by allowing for a more efficient wing, with reduced surface area and tip vortices.

Lagarde adds that noise on the ground should be greatly reduced compared with a standard thermal engine-only configuration. Not only will battery-driven wing motors reduce strain on the main engine, they should also be able to provide the drive needed for taxiing.

As formally stated by the partners, the objective of the EcoPulse project is to “develop technologies that boost the environmental efficiency of aircraft and meet the future needs of the air travel industry”. Indeed, creating “new uses for air transportation” is another stated goal. Such claims are typical of electric propulsion efforts, which envision enabling small airports to host operations at late night and early morning hours that are today banned owing to noise.

The objectives may not be unique, but France should nonetheless be given credit for maintaining the vision. CORAC earlier this year outlined a new technology development roadmap for aircraft to enter service in the 2025-2030 period and beyond. Three key areas of focus are energy optimisation, automation and connectivity, and new methods of design and production. EcoPulse is also supported by DGAC, the French civil aviation authority.

Stephane Cueille, head of research and technology at Safran and CORAC steering committee chair, describes EcoPulse as “an excellent opportunity to evaluate and identify the specific features expected… in terms of new hybrid propulsion aircraft projects”. Safran, he says, aims to position itself as a market leader in this segment.

Airbus executive vice-president for engineering Jean-Brice Dumont says: “This distributed hybrid propulsion demonstrator is a very important step towards preparing the certification standards for a more-electric aircraft. It also gives us the opportunity to improve our simulation models and consider their use on larger aircraft.”

Given the limited ability of existing or anticipated battery technology to deliver range and payload beyond the smallest of short-hop air taxi-type vehicles, hybrid systems are expected to be the first practical means of introducing electric propulsion to aircraft. Rolls-Royce, which is purchasing Siemens’ electric propulsion research team in a bid to develop a comprehensive hybrid electric integration capability, is partnering Airbus in another project, E-Fan X, which they expect to fly in 2021.

E-Fan X will be a BAe 146 equipped with an R-R AE 2100 gas turbine in the fuselage to drive an electric generator producing 2MW of power. The right inboard engine nacelle will house a Siemens electric motor driving the fan from an R-R AE 3007 gas turbine of the type used to power Embraer ERJ-145 regional jets. Airbus-supplied batteries will complete the power system.

Meanwhile, Lagarde is under no illusions about the scale of the EcoPulse challenge. The configuration, he says, will certainly change as testing progresses. The hybrid propulsion system in the modified TBM is expected to go from being pilot-controlled to a more automated configuration, as the partners work out – with the help of a flight-control computer being developed by Airbus – how to set the “hybridisation ratio” for various flight conditions.

Even such basics as how many secondary propulsors to engage at any one time are yet to be determined. The partners are clearly optimistic that they can ultimately deliver reductions in noise and emissions – but how far they can push the standard remains to be seen. 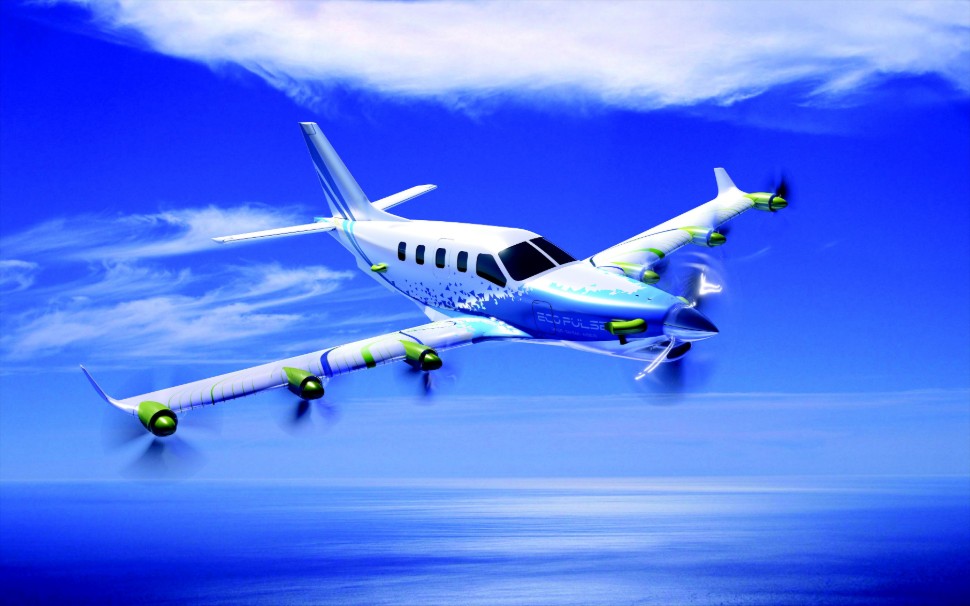