Dassault is unveiling its Falcon 6X cabin mock-up at NBAA 2018 as it begins cutting metal on the new super-wide cabin business jet ahead of a planned first flight.

Speaking at NBAA 2018 today, Dassault Aviation executive vice president civil aircraft Olivier Villa said that the Falcon 6X’s PW812D powerplant is in flight and ground test with Pratt & Whitney Canada and the programme is on schedule for a first flight in 2021. “We will deliver the first aircraft in 2022,” he said. 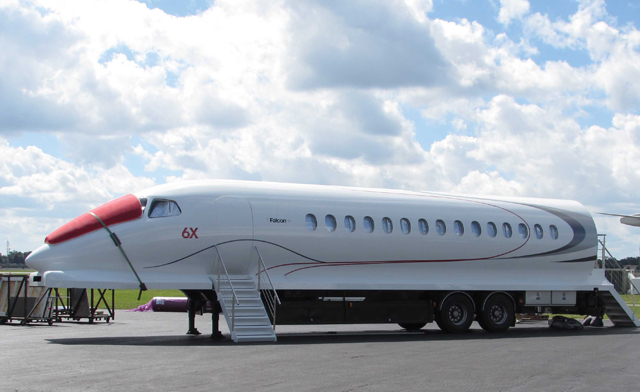 The cabin mock-up is making its debut here at the show as Dassault outlines cabin options for the twinjet. Key programme partners are in place and detail design is progressing. The first metal has been cut for some components such as lower wing and rear fuselage parts.

Dassault Aviation chairman and chief executive Eric Trappier said he was encouraged to report that the market for pre-owned business jets is transitioning into “a sellers’ market”. “At the end of 2017, more than 30 used Falcon 7Xs were on the market. The inventory has shrunk by 50%.”

He expects this improvement in the pre-owned segment to be start to be reflected in demand for new aircraft. Trappier warns that Dassault is taking a “conservative” approach with production, targeting to deliver just one more Falcon this year than the 49 shipped in 2017.