​RETROSPECTIVE: Concorde as viewed from the flightdeck

Although the narrow-section fuselage and slender delta wing form demanded by aerodynamic considerations result in Concorde resembling an elegant bird, they do present a few extra problems to the pilot. 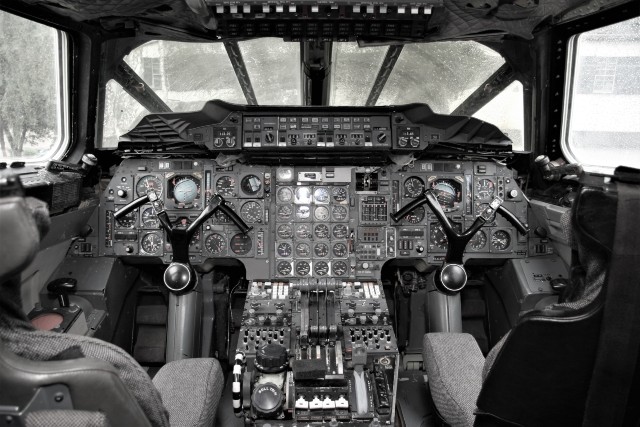 The flightdeck is even more confined than those of most modern aircraft, and the large diameter Attitude Director Indicator (ADI) that dominates the instrument panel seems almost out of proportion. Its expanded pitch scale calibrated in degrees is there for a good reason, to help the pilot cope with another problem: the high angles of attack demanded by a slender delta at slow speeds, and the need for accuracy in pitch handling during take-off and landing.

Once Installed in the driver's seat, one is in a similar position to a 747 pilot – 19ft above the ground, 37ft ahead of the nosewheel and 97ft ahead of the mainwheels – and similar points have to be watched when taxiing. On a sharp turn the nose must be swung very wide if the main wheels are to remain on the concrete. Secondly, at this height (equivalent to that of a third-storey window) speed judgement is more difficult. What seems like a crawl is around 40kt, and it is as well to keep an eye on the INS groundspeed read-out.

Concorde, being a thoroughbred, is a bit finnicky about the ground over which she is taxied. A natural nodding of the fuselage can occur, giving a divergent oscillation which is distinctly uncomfortable and which can reach unacceptable proportions. A bump in the runway at Singapore was found to excite the aircraft at the critical frequency, and it had to be removed. Further work is going on to eradicate this problem, including experiments with varying pressures in the main oleos. 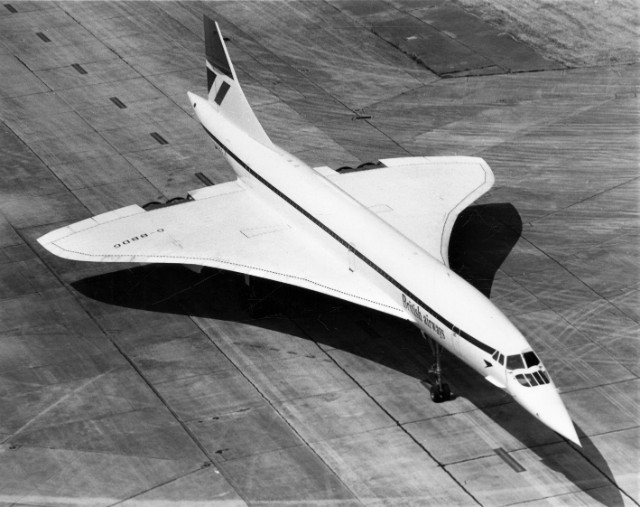 "A bit finicky on the ground"

When computing the take-off weight, apart from take-off distances and the net flightpath, account must be taken of tyre rolling speeds and brake energy limits, for at the higher weights above 180 tonnes, Vr is in the region of 200kt. An additional factor, taken from the performance graphs, is known at Theta 2, the attitude at V2 on three engines.

When the Rolls-Royce/Snecma Olympus 593s are set to reheat for take-off there is a healthy push in the back; visually the acceleration is not so apparent.

At a brake-release weight of 181 tonnes, Vr of 197kt is reached in about 40sec; a long rearward movement of the control column (at a force of some 30lb) is required to rotate to the Theta 2 angle of 13°. Sight of the ground is lost at 10° and from then on the very effective ADI presentation is in constant use. As speed increases the nose is raised to around 18° to maintain V noise (Vn, 250kt), and at the cut-back point the flight engineer moves the throttles back to a pre-set angle on the quadrant and the nose is lowered back to Theta 2, maintaining Vn.

At the top of the noise-abatement climb the engine mode switch is put to CLIMB, the throttles are pushed fully forward, and the nose, which had been dropped to 5°, is raised with the visor. The view through the windscreen, into a long greenhouse formed by the top of the nose and the sloping visor, is distinctly odd.

Speed is increased to 300kt in the terminal area. The controls are light and positive thanks to the autostabilisation system, and all-round vision is good. The rate of roll with full authority over the two outer elevons and a restricted range on the inners is around 18°/sec.

Once clear of the terminal area, the aircraft is accelerated to maximum operating speed (Vmo) and climbed until the subsonic cruise Mach number of 0.93 is reached. The optimum level for subsonic cruise varies between 25,000ft and 39,000ft according to weight, but if the height is increased significantly above optimum, the IAS at Mach 0.93 will fall progressively below the minimum drag speed. In fact the drag becomes so high that it is no longer possible to maintain height at subsonic speed; if the IAS falls below 300kt at high weights, reheat and possibly a descent may be necessary to regain Vmo.

For the transonic acceleration and the first part of the supersonic climb, reheat is engaged and the aircraft flown at Vmo. The centre of pressure moves aft at this stage and the flight engineer pumps fuel back into the rear trim tanks to keep the c.g. within limits. Around Mach 1 large changes in pitch elevon control power and hinge moments occur, but are automatically controlled by the auto-stabilisation system.

Reheat is cancelled at Mach 1.7, climb power is used up to Mach 1.95 and cruise power thereafter. By flying at cruise power up to whatever parameter is limiting, the resultant flightpath will be a cruise climb from 50,000ft, ending at a height which will depend on the weight and the ambient temperature. Maximum operating height is 60,000ft.

Three limits have to be observed at this stage: Vmo, Mmo and the maximum operating temperature (Tmo) of 127°C. But the problem of temperature shear gives the most difficulty.

Optimum supersonic cruise speed is Mach 2.02 and the overspeed warning comes in at Mach 2.04. As a change in ambient temperature of 2°C is equal to a Mach number shift of 0.01, it does not require much of a temperature shear to set off the overspeed warning. When the nose is raised to reduce the speed the kinetic energy of the aircraft is such that although the IAS falls, the Mach number may remain constant until the aircraft is again levelled. In normal lapse-rate conditions 500ft has to be gained to reduce the Mach number by .01. The extent of the problem can be appreciated. The worst temperature shears are often found near the tropopause in the tropics, where sudden changes of temperature in the order of 12°C are not uncommon.

During the supersonic flight the flight director and the autopilot are normally used in the MAX OP SOFT mode. In an attempt to avoid repeated overspeed warnings this was redatumed to Mach 2; the number of warnings has certainly been reduced but height variations still occur.

The method now in use is to hold the height constant but reduce power to maintain Mach 2. The fuel penalty is negligible but it does throw an added burden on the flight crew. The manufacturers are looking at a number of possible solutions, including the use of an additional term in the autothrottle to build in an altitude-hold function.

The top-of-descent point is critical for fuel economy. When the moment arrives the attitude is held at the supersonic cruise angle of +3° and power reduced to a setting which depends upon ambient temperature. At Mach 1.6 the rate of descent is slowed down. Below Mach 1 the throttles are set at 34° on the quadrant and descent is continued at 350kt.

Low-level holding at 250kt presents no problems, but when decelerating to approach speed the visor and nose have to be lowered completely to give an adequate view of the runway. VREF can vary from 155kt to 180kt and at these speeds the attitude is 11° nose-up. Autothrottle takes care of the speed instability and the auto-stabilisation system deals with the static stability; from the pilot's point of view pitch handling is therefore normal. As the control column is pulled back and the elevons raised some flap effect is lost and initially the aircraft will tend to sink faster. On the approach the aircraft is on the back of the drag curve and any significant excursion below Vref will cause an inordinate drag rise. If Concorde gets seriously low and slow, reheat may be needed for recovery. 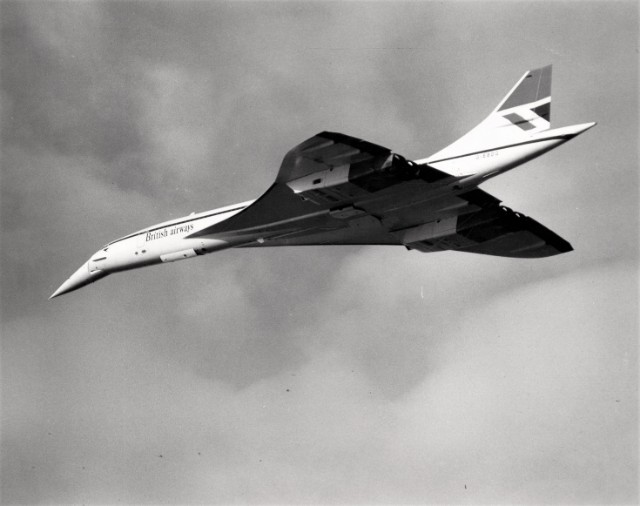 "From every point of view a magnificent achievement"

Landing presents no problem. Although the natural tendency of a slender delta is to pitch up as the angle of attack is increased, the auto-stabilisation feeds in incidence trim so that the pilot exerts a continuous pull force for the flare. After touchdown no further stick movement should be made initially; if the nose is lowered too quickly increased lift from the elevons will tend to raise the mainwheels, causing a skip.

Undoubtedly the skill and ingenuity of the designers and test pilots have served to contain the difficult characteristics inherent in such a vehicle and to present it to the pilot with handling qualities similar to those of a more conventional aircraft. From every point of view Concorde represents a magnificent achievement.