Irkut’s initial Russian-powered MC-21 has emerged in its test campaign livery, following painting at a facility in Ulyanovsk.

The aircraft – fitted with Aviadvigatel PD-14 engines – has been flown to Moscow Zhukovsky to continue its flight-test programme.

Its livery is similar to that carried by the Pratt & Whitney PW1400G-powered aircraft, but features the variant designation MC-21-310 on the fuselage.

Irkut says the twinjet performed well on the flights from Irkut to Ulyanovsk and subsequently from Ulyanovsk to Zhukovsky, according to the crew of three.

It intends to exhibit the aircraft during the Moscow MAKS air show in July. 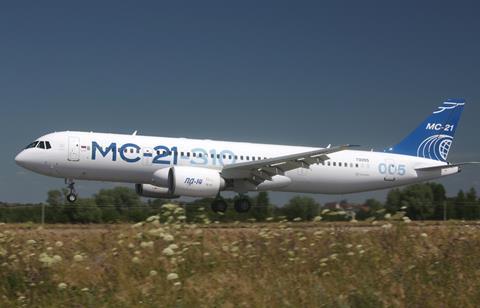